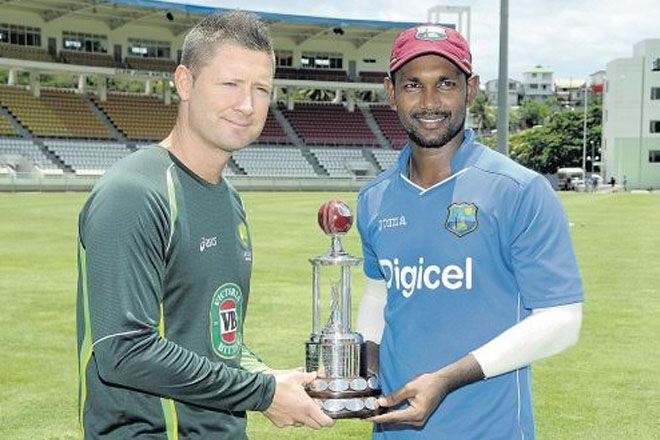 Roseau, Dominica (CMC) — Lowly ranked West Indies, anxious to build on a momentum gained from a oneall draw with England, are seeking to ignite the end of a 20-year domination by highly ranked Australia, when the two sides begin the first of a short Test series here today. Morale is said to be high in a West Indies team packed with young players who appear undaunted by the prospects of David and Goliath-like contests that loom in Roseau and Kingston.

West Indies, eighth in the ICC Test rankings, above Bangladesh and Zimbabwe, are planning to take the fight to Australia who are second to South Africa and who have not played a Test since January. “I think we are in a good frame of mind after the last Test match with a win against England and a good week in Barbados,” said Captain Denesh Ramdin yesterday, after an intense one-week training camp in Bridgetown to prepare for the series. “We did some good things and hopefully we could carry that into the game.

We know that they are a good team. They will come hard at us and we need to stand up as big men and be counted for.” The Aussies, on the other hand, will be eager to take on a Caribbean side without Shiv Chanderpaul, who has played nine home series against them scoring five centuries and averaging 80.38 in the process.

The middle order vacancy created by Chanderpaul’s controversial exit is likely to be filled by Shane Dowrich, who impressed with half-centuries in his two innings for the President’s XI during the tour match. Jermaine Blackwood, whose role in the middle order takes on added importance with Chanderpaul’s omission, will hope to continue his form against the Australians after emerging as the leading West Indian run scorer in their recent series against England.

“They are a tough team but we have some youngsters who have done well in regional tournament,” Ramdin told WICB media. “They have the talent. It’s just some experience at this level now and they are going to get the opportunity. I think that they are going to put up their hand and be counted for.”

The Aussies suffered a setback with opening batsman Chris Rogers ruled out due to symptoms of concussion after being struck on the helmet by a local bowler in the nets on Sunday. He is expected to be replaced by Shaun Marsh, who scored an impressive hundred in the tourists’ lone warm-up match against the President’s XI in Antigua. The first match between Windies and the Aussies is the fourth time Test is being played at Windsor Park where spin is said to be king.

Of the 101 wickets which have fallen at Windsor Park, spinners have claimed 58, leaving the two sides pondering their spin options. West Indies will decide from the Guyanese duo of Devendra Bishoo and Veerasammy Permaul, while the visitors have brought Nathan Lyon and the uncapped Fawad Alam, the former Pakistani asylum seeker. “We have some good spinners. They have some good batters, so it’s going to be a keen contest,” the skipper said. “We need to get to the right areas and put them under some pressure. New ball bowlers need to get early wickets.”

West Indies have not beaten Australia in a Test match in 12 years and in a series in 23 years. Michael Clarke’s men secured a 75-run win over the home side despite a 10-wicket haul from local hero Shane Shillingford the last and only time these two countries met at Windsor Park three years ago.

“It is very important that the main players go out there and stand up and put our hands up and do the bulk of the batting for the team,” he said. “We know what Marlon (Samuels) is capable of, young Darren Bravo, who has been here for six, seven years now. So it will rest on his shoulders, so he knows that and I think he is going to do well in this series.”