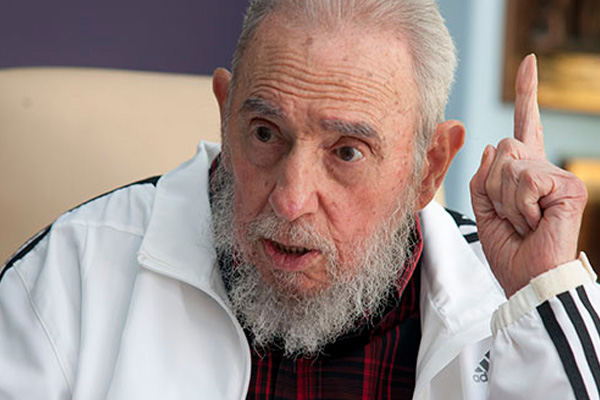 Fidel Castro: Venezuela ready to confront US on sanctions

Havana, Cuba — Cuba’s Fidel Castro warned Tuesday that Venezuela was prepared to confront US “threats and impositions,” and said Washington could no longer count on the Venezuelan military to do its bidding.

Venezuela “will never allow a return to the shameful pre-revolutionary past,” Castro said in a letter to Venezuela’s President Nicolas Maduro published in Cuba’s state-run media.

Castro’s letter comes just two days after Maduro gained decree-making powers in matters of security that the opposition fears will be used to crack down on dissent.

The confrontation with Washington follows the imposition of US sanctions March 9 on seven Venezuelan officials that the United States alleges have been involved in human rights abuses against opponents of the leftist regime in Caracas.

The measure signed by US President Barack Obama cites Venezuela as “an extraordinary threat to the national security” of the United States, which Caracas in turn has interpreted as a US threat.

The dispute has shadowed, but not derailed, US-Cuban negotiations on restoring diplomatic ties severed in 1961, agreed in December by Obama and Cuba’s President Raul Castro, Fidel’s brother.

The 88-year-old Fidel resigned as president in 2006 for health reasons but retains enormous influence as the leader of Cuba’s 1959 revolution.

He was particularly close to the late Venezuelan president Hugo Chavez, who provided Havana with a steady supply of cut-rate oil and brought in thousands of Cuban advisers.

Fidel maintained in the letter to Maduro, Chavez’s successor, that Venezuela has always been prepared “to argue in a peaceful and civilized manner with the United States, but will never accept threats and impositions by that country.”

He praised the “attitude” of the Venezuelan people and the “exemplary discipline and spirit” of the country’s armed forces in the face of the US sanctions.

“No matter what the imperialism of the United States may do, it will never be able to count on them (the armed forces) to do what it had done for so many years,” he said.

“Today, Venezuela counts on the best equipped soldiers and officers in Latin America,” he said.