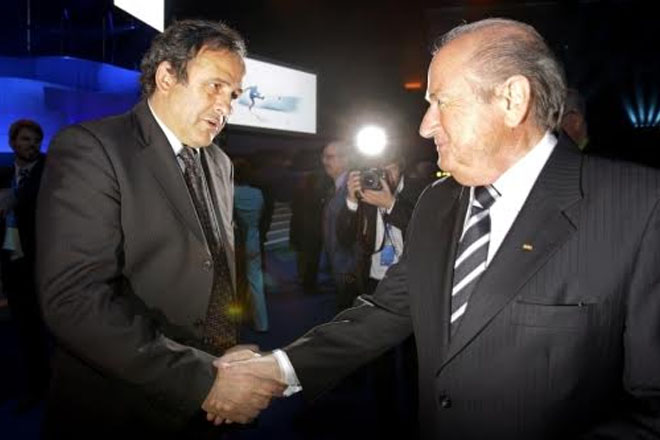 Lausanne, Switzerland (AFP) — A criminal case in Switzerland may not be what forces Sepp Blatter from FIFA’s presidency.

FIFA’s own ethics committee — which includes an investigative arm and a branch responsible for judgement — could prompt Blatter’s suspension regardless of whether the Swiss attorney general ultimately files charges against him.

FIFA’s ethics committee changed significantly in 2012, when it gained the right to open inquiries without approval from the secretary general.

“This was a fundamental modification that strongly reinforced its independence,” said a former high-level FIFA official, who requested anonymity.

Committee spokesman Andreas Bantel would not comment on specifics related to Blatter or Platini over the weekend, but said the panel initiates a probe “if there is an initial suspicion,” underscoring that this applied to all FIFA officials, regardless of rank.

The criteria of “initial suspicion” has almost certainly been reached with respect to Blatter, after Swiss prosecutors on Friday said he was being investigated over the 2005 sale of World Cup television rights to the Caribbean Football Union, then run by his former ally Jack Warner, a deal which had allegedly been “unfavourable for FIFA”.

Platini has been questioned by Swiss investigators in connection with a murky $2 million payment he received from Blatter in 2011, allegedly made for work the Frenchman carried out for FIFA between 1999 and 2002.

An inquiry by the ethics committee would not automatically trigger Blatter’s suspension, but, with the long-serving president having already committed to leaving in February, the pressure for him to stand aside could rise to unprecedented levels.

Platini had been the favourite to succeed Blatter, but former FIFA insiders have said that being the subject of an open ethics probe could make it impossible for him to win the presidency.

American prosecutor Michael Garcia led the investigative branch until last year, when it looked into bidding for the 2018 and 2022 World Cups, awarded to Russia and Qatar respectively.

Garcia resigned in furious protest, after what he described as the whitewashing of his findings.

He was replaced by Cornel Borbely, a 36-year-old former prosecutor in Zurich, who specialises in economic crimes.

“I am the only one who decides when to open, conduct and close an investigation,” Borbely said in March. “I am totally independent of every FIFA member. If I wasn’t, I wouldn’t have taken this job.”

The modifications made in 2012 technically give the committee unilateral authority on the cases it takes and its scope of inquiry.

Borbely’s investigative unit has six other members. The panel responsible for judgement is led by the German judge Hans-Joachim Eckert and has seven other members.

Under current rules, the investigative branch can withhold the names of individuals facing inquiry.

Among the most prominent sanctions levelled by the ethics committee in recent years was the lifetime suspension of Chuck Blazer, a former FIFA executive committee member whose cooperation with the FBI has been central to the US indictments against nine ex-FIFA officials and five sports marketing executives.