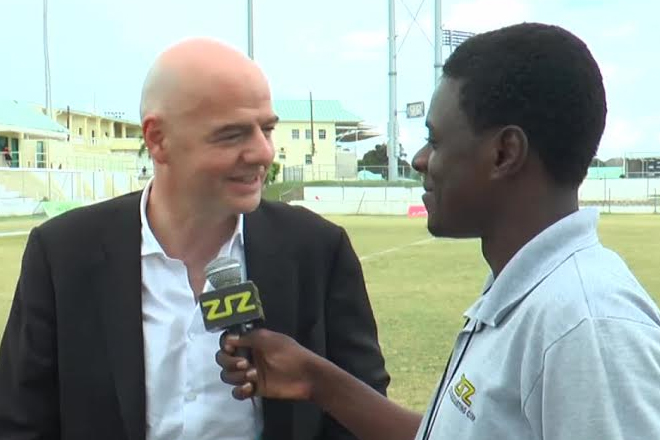 (ZIZ News) – FIFA’s presidential candidate Gianni Infantino visited the Federation on Thursday, where he met with representatives of the St. Kitts and Nevis Football Association (SKNFA).

Infantino, who is the current UEFA General Secretary, was accompanied to St. Kitts and Nevis by former Trinidad and Tobago footballer, Dwight Yorke.

Addressing members of the local media at the Warner Park Football Stadium, Infantino said he wanted to see firsthand the needs of FIFA member associations, including the SKNFA.

“Of course I am here because I am candidate for the FIFA presidency,” he said. “Elections will take place on the 26th of February and my task now is to travel all around the world to see everyone, to discuss and to be on the spot here, on the pitch and see what the needs are of the people who love football in St. Kitts and Nevis so that we can address this in the best possible way.”

He added, “Today and later today all the South American countries, which is course a whole continent expressed their public support for me. In the Caribbean, in Central America, of course in Europe, in Africa and so I’m very confident because I can see when you love football, you want to open the doors of FIFA to football, to the players; Dwight Yorke is here today as well and that’s what we have to do.”

While SKNFA President, Anthony Johnson said the local association has not decided which candidate it will support, he praised Infantino’s vision for world football, noting “I think that the polices presented are impressive and of course the difficulties that FIFA are undergoing right now would be a challenge for anyone who becomes the president in the next month or two.”

He also added that “as far as what was proposed as a vision we are certainly impressed by the presentation. However, we would have to look at all of the candidates, see what they are presenting. We have listened to some of them already and we will have further opportunities in the very near future to listen to the others.”

International reports suggest that in his bid to become the next president of FIFA, Infantino has so far gained support from UEFA, the Central American Football Union, the South American Football Confederation and the German Football Federation.