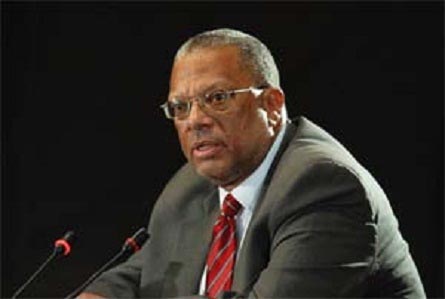 Kingston, Jamaica (CMC) – Finance Minister Dr Peter Phillips says that the regulatory measures implemented following Jamaica’s financial crisis of the 1990s have resulted in “phenomenal growth in size and assets” of the securities sector on the island.

“By December 2012 there were 29 securities firms and more than J$663 billion under management. In the unit trusts industry, the aggregate value of funds was in 2003, J$8.2 billion and by December 2012, the funds had grown close to J$50 billion,” he added.

He told the conference which ends later on Friday that it was also necessary to provide stability to the markets and protect customers, workers and taxpayers “from moral hazards that are inherent in certain financial decisions.”

He warned that any shortfall could undermine the financial system stability and undercut possibilities for economic growth.

Phillips said that the banking crisis faced by Jamaica in the mid 1990s “is a lesson that we in Jamaica will never forget, because the resolution of that crisis imposed a significance cost and indeed, we are still overcoming the effects of that crisis in many respects.

“If nothing else, has convinced us of the value of a sound regulatory and supervisory environment. The financial sector crisis exposed the weaknesses in the framework for financial institutions.

“As a result of this, the regulatory framework for financial institutions was enhanced and as a consequence of that, the supervision of insurance and securities sector were placed under the direction of the Financial Services Commission (FSC).”

He told delegates that the outcome of all the regulatory enhancements was that Jamaica’s financial system was able to “absorb the effect of the 2008 global crisis without any direct negative impact.

“That is a lesson that has sustained us in our conviction in the country that a sound regulatory framework is an essential platform upon which economic growth, development and system stability, as a whole, must be based.

“Overall, I think that it is fair to say that the resilience of our financial sector is a direct result of the measures that were instituted during and immediately after the financial sector crisis of the mid 90’s.

“This led to the consolidation of the financial sector, as well as significant strengthening of the regulatory powers, to enhance the supervisory authority and to enforce prudential requirements and the capacity to take early actions,” Phillips added.

The conference, organised by the FSC and the Caribbean Regional Technical Assistance Centre (CARTAC), is being held under the theme: ‘Fostering innovation, growth and financial stability in the Caribbean Securities Market- a path to recovery”.