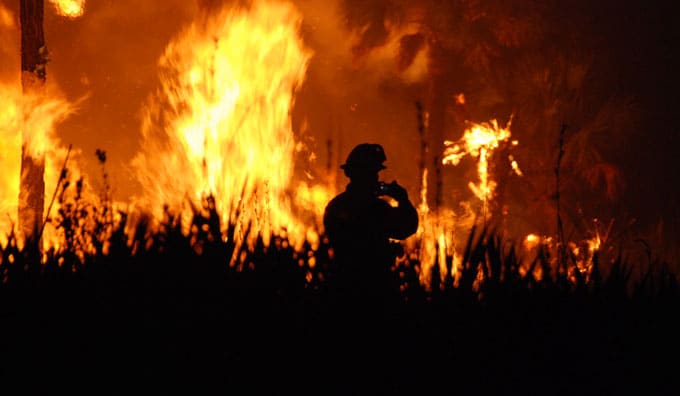 Basseterre, St. Kitts, February 18th, 2021 (ZIZ News) As the federation approaches the peak of the dry season, Fire Officers stationed at the Basseterre Fire station visited ZIZ studios on Thursday for the programme “Policing With You” to sensitize the public on how they can assist with addressing bush fires.

Fire Substation Officer Level 2, Rommel Williams said the dry season occurs from late February to April noting that in March there is a significant rise in bushfire responses.

“Around February down into March down to April and that is the period where we have our largest number of fires and fire reports coming in especially in the month of March where you have a significant rise in our responses and to compare it to other months like for January you might just have ten but for March we’d have like forty so you could see the significant rise around that period as it relates to bush fires.”

Fire Substation Officer, Timothy Martin spoke to the seriousness of bush fires explaining that they can be a drain on their resources.

“In our opinion bushfires they are very serious, now we have situations where one station they might face maybe two to three large fires in one day sometimes even four and these poses a lot of strain on our resources as a fire station.”

As it relates to the general public and how they can help to reduce the likelihood of a bush fire, Officer Williams made a number of recommendations for persons to follow in order to avoid being responsible for a bush fire.

“For farmers we recommend that if you’re clearing your land because sometimes they clear it and sometimes they leave it to grow back up-try to keep it down as much as possible…so what we recommend is that you keep it down, keep the brushes down so that when it’s time for you to utilize it you don’t have as much grass on the land so there’s no need to burn it and persons who might have garbage in their yard-the only recommendation I can give to them is to take it to the landfill.”

Officer Martin added that persons should not park in front of fire hydrants because it obstructs the fire officers from accessing them.

He also noted that if persons are found to be responsible for a bush fire can be charged under the Small Charges Act.

“Policing With You” airs every Thursday at 9:15am on ZIZ radio during the “Morning Show with GCue.