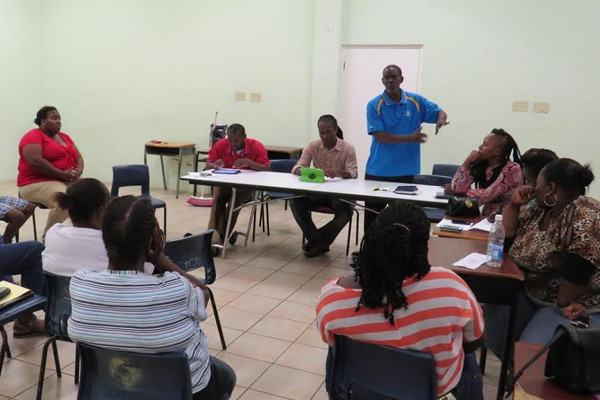 Basseterre, St. Kitts– The Department of Constituency Empowerment (DCE) recently held its first constituency clinic with the residents of Hermitage Village, Cayon to address the garbage issue there.

Residents came out to demonstrate their willingness to work closely with the government to ensure a community-based effort in maintaining a clean and healthy Hermitage which would be free from rodents, void of garbage and no incidences of illegal dumping.

Mr. Alphonso Bridgewater, manager of the Solid Waste Management Corporation (SWMC), stressed the importance of responsibility, ownership and pride in garbage storage and disposal. Mr. Bridgewater acknowledged that coming together for a meeting was the first step in responsible action and ownership of the problem as a community. He applauded the residents for recognizing that garbage was a problem even if some of it was generated from other villages. He further explained the importance of reporting illegal dumping to SWMC and the Department of Health so disciplinary and legal measures can be taken.

Mr. Alexander Riley, the Chief Health Officer at the Department of Health, noted that garbage was associated with rats, cockroaches and mosquitoes which are all disease carrying creatures. He further encouraged residents to make use of the Vector Control Officer stationed at the Cayon Health Centre. Mr Riley also outlined the legalities associated with cleaning abandoned lands and assured the residents that his Department would support any reports of that nature. Earlier in the month, Dr. Terrence Drew challenged the Department of Health to continue supporting the cleanup campaign in Hermitage including cleaning the blocked drains.

Meanwhile, in his presentation Dr. Drew mentioned that as a Medical Doctor he recognizes that people’s health is at risk when garbage is not managed and properly disposed of and understands that it is important to get rid of the disease-carrying agents by getting rid of their habitat, hence the need for the cleanup campaign. He ended by encouraging the residents to continue working with the government to ensure that together they would maintain a clean and healthy country.

Residents also took the time to explain the problems plaguing them and agreed that a follow up clinic should be conducted not only to plan the way forward for the clean-up but also to create an education, awareness and management campaign which would ensure the community is kept clean.

The meeting ended with PRO of SWMC Mr. Wilmon McCall providing tips for a successful Clean-Up Campaign and explaining the need for involvement of Public Works and its Engineering Department in formulating an appropriate solution for the drainage issue.

Dr. Joyelle Clarke, Director of the Department of Constituency Empowerment gave the commitment of the Department and its Constituency Officer to continue providing support to the Clean-Up Campaign and to continue the coordination between all government agencies. She concluded by reminding the residents that the DCE exists to ensure the empowerment of all constituents.

DCE has committed itself to enabling community-based problem-solving by coordinating focused, intimate constituency meetings with residents. Having conducted field work in the area, the Constituency Officer, Ms Larissa Chiverton recognized that a repeated concern for the residents was the growing piles of garbage, blocked drains, and illegal dumping from persons not living in the area. As a result the DCE saw it fit to host the Constituency Clinic in Hermitage. The meeting took the format of a round table discussion and included presentations from the Solid Waste Management Corporation, the Department of Health, Dr. Terrence Drew and the Hermitage Residents.

The Constituency Clinics are steps towards ensuring residents are heard as a collective body and suitable responses and actions are provided by the government. It is the hope of the DCE that more communities would benefit from the initiative.