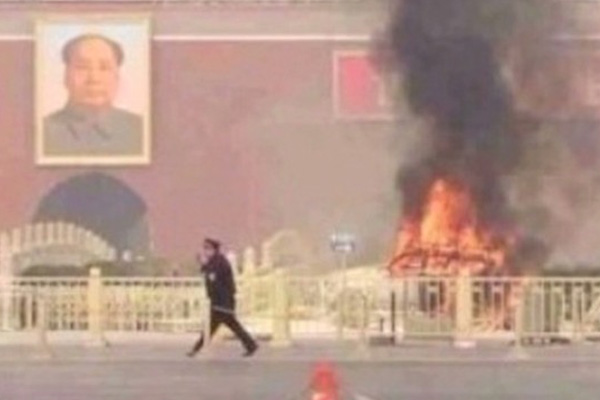 Beijing (CNN) — Five suspects have been detained in Monday’s deadly crash in Beijing’s Tiananmen Square, which has been identified as a terrorist attack, Beijing police said Wednesday.

The attack — in which five people died and dozens were hurt — was “carefully planned, organized and premeditated,” police said on their official Weibo account online.

The spokesman, who was not named, said Usmen Hasan; his mother, Kuwanhan Reyim; and his wife, Gulkiz Gini, drove a jeep bearing a Xinjiang license plate into a crowd in the famed square at noon on Monday, killing two people and injuring another 40.

Authorities had earlier put the number of injured at 38.

The jeep then crashed into a guardrail of Jinshui Bridge across the moat of the Forbidden City. All three of the jeep’s occupants died when they set gasoline afire, the spokesman said. The other two fatalities were tourists; a woman from the Philippines and a Chinese man.

Police found gasoline, two knives and steel sticks “as well as a flag with extremist religious content” in the jeep, the police posting said.

In addition, authorities found knives and a “jihad” flag in the temporary residence of the five detained suspects, it added.

Tensions between Han Chinese and the largely Muslim Uyghurs have sometimes turned violent.

A spokesman for the World Uyghur Congress, a diaspora group, said Wednesday it was not clear that Uyghurs played any role.

“Every time something like this happens, authorities usually point fingers at Uyghurs,” Alim Seytoff said. “The notice should not be taken as the evidence of Uyghur involvement in the incident.”

Willy Lam, an adjunct professor at the Chinese University of Hong Kong’s Center for China Studies, said the incident would be considered a loss of face for Beijing’s leaders, especially if it turns out to be related to Uyghur separatism.

“It was close to the Zhongnanhai party headquarters and, in terms of timing, it’s on the eve of the plenary session of the Chinese Communist Party, so they don’t want these rumors and speculation,” he said.

Earlier this month, Chinese police said they had arrested 139 people in Xinjiang for spreading religious extremism online. The arrests came in the wake of riots that left 35 people dead.

China’s state broadcaster, CCTV, showed no footage of the incident. Images posted immediately after the incident on Weibo, China’s version of Twitter, which showed black smoke and a vehicle engulfed in flames, were largely deleted. Searches combining the words Tiananmen, terrorism and car crash were also blocked.

CNN broadcasts about the incident were blacked out inside China.

On Tuesday, the square was back to normal.