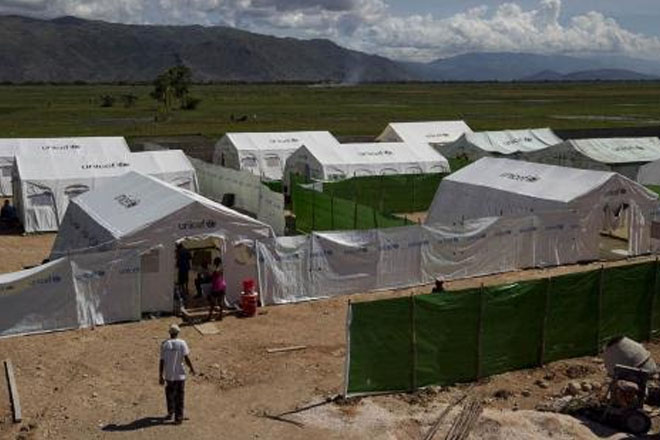 Five years on, no justice for the victims of the cholera epidemic in Haiti

London, England — Five years after the outbreak of the cholera epidemic in Haiti, Amnesty International said it is seriously concerned at the failure of the United Nations to ensure the victims’ human rights, including their right to a remedy.

On 14th October 2010, the first cholera case in Haiti was detected, its first appearance in over 100 years. Just one week later Haitian health authorities confirmed the outbreak of the cholera epidemic.

Several scientific studies found that UN peacekeeping troops from Nepal, which was suffering from an outbreak of cholera at the time, brought the disease with them to their assignment in Haiti. The secretary-general’s panel of experts tasked with investigating the situation, also identified improper sewage discharge from a UN peacekeeping (MINUSTAH) base into a key river as the “most likely source of the cholera strain found in Haiti”.

A chronic lack of access by people in Haiti to clean water and sanitation and just nine months after a devastating earthquake, facilitated the quick spread of the disease. According to statistics from the Haitian ministry of health, up to 31st August 2015, 9,013 people had died and more than 750,000 had been infected. Several epidemiologists have expressed concern that the disease is at risk of becoming endemic.

Thousands of victims of the epidemic, including family members of the deceased, have been claiming, among other things, violations of the right to health and right to life and seeking reparation from the UN, including through lawsuits. The UN has so far dismissed the victims’ claims as not receivable and invoked legal immunity to close them down.

Amnesty International said it acknowledged the efforts carried out by the UN to eradicate cholera in Haiti, and, amongst other initiatives, to improve the sanitation systems for the whole Haitian population. These projects include the launch of a ten-year cholera elimination plan and the “Total Sanitation” campaign.

However, Amnesty International is concerned that these laudable efforts have not been accompanied by an adequate response to fulfil the right to effective remedy of the victims of the epidemic. In particular, the UN has to date failed to establish a fair, transparent and independent mechanism to assess the claims of the victims, or ensure their human rights.

The Basic Principles and Guidelines on the Right to a Remedy and Reparation for Victims of Gross Violations of International Human Rights Law and Serious Violations of International Humanitarian Law (Basic Principles) state that victims should be provided with “full and effective reparation”. Those principles also establish that “[i]n cases where a person, a legal person, or other entity is found liable for reparation to a victim, such party should provide reparation to the victim.”

Several current and former UN human rights independent experts, as well as several renowned legal commentators, have backed the victims’ claims by urging the UN to ensure an effective and transparent remedy is provided to the victims of cholera and by expressing their concern at the failure to ensure the human rights of the victims to access justice.

For example, the then UN High Commissioner for Human Rights, Navanethem Pillay, stated in a speech at the 2013 Martin Ennals Award Ceremony for Human Rights Defenders that she “stand[s] by the call that victims of … cholera be provided with compensation”. Most recently, in September 2015, concluding his visit to Haiti, the UN independent expert on the situation of human rights in Haiti reiterated his previously formulated recommendation to establish a truth and reparation commission for the victims of the epidemic, in accordance with Basic Principles.

While the UN secretary general recognized in July 2014 that the UN has a “moral responsibility” to help Haiti tackling the epidemic, the UN has until now failed to directly address the right to remedy of the men, women and children who are victims of the cholera outbreak, or outline measures that will be taken to address their specific human rights concerns. A letter from Amnesty International on this issue has remained unanswered, while other correspondence sent by human rights experts or politicians haa also not received any substantive responses on this specific point.

Given that the UN has the protection and promotion of human rights in all member states at the core of its mandate and is bound by its Charter to promote human rights, Amnesty International believes that a continued failure to respect the rights of victims of the cholera outbreak in Haiti to an effective remedy runs contrary to the object and purpose of the Charter and could undermine the moral authority that is essential for the UN’s role in holding member states to their obligations to respect, protect and fulfil human rights.

As the UN Independent expert on Haiti said in relation to the Basic Principles, “the United Nations should be the first to honour these principles.”

Amnesty International called on the UN to uphold the cholera victims’ rights to access justice and remedy for the alleged human rights violations by establishing a fair, transparent and independent mechanism to hear the claims of cholera victims, and ensure redress, including compensation. The legacy of the UN in Haiti, and particularly of MINUSTAH, will be greatly determined by the way the United Nations responds to this very important situation.