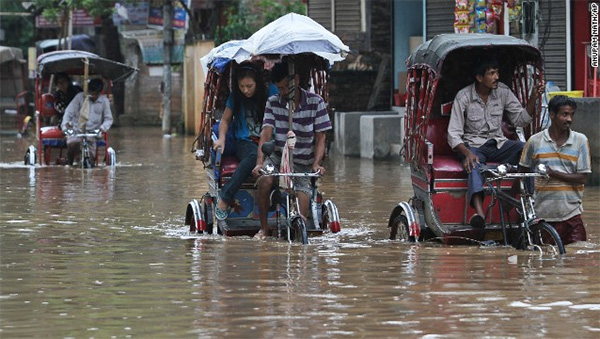 (CNN) — At least 355 people have been killed in flooding caused by intense monsoon-season rains across northern India and Pakistan over the past few days.

The death toll in Pakistan is 205 as of Monday, according to Pakistan’s National Disaster Management Authority. In India, the toll has reached 150, according to the Ministry of Home Affairs.

Thousands more have been stranded.

Much of the state’s capital, Srinagar, was submerged, forcing thousands to move to rooftops as they became trapped in their homes across the city.

Indian Prime Minister Narender Modi visited the flood-hit region over the weekend to assess the situation and immediately declared it a “national-level disaster.” He said everything would be done to provide aid and restore bridges and communication links washed away by the incessant rains.

Modi also offered help to Pakistanis living across the border in Pakistan-administered Kashmir, which has also been lashed by heavy rains and flooding.

“It is a matter of great distress that the retreating monsoon rains have played havoc in many parts of our two countries,” he wrote in a letter to Pakistani Prime Minister Nawaz Sharif, adding that “the devastation caused by the record rains and the consequent flooding is unprecedented.”

“While reviewing the situation in Jammu and Kashmir, I was informed that the damage to life and property is equally, if not more, severe in areas across the ‘Line of Control’ as well. My heart goes out to the affected people and my deepest sympathies are with them and their families.

“In this hour of need, I offer any assistance that you may need in the relief efforts that will be undertaken by the Government of Pakistan. Our resources are at your disposal wherever you need them.”

The Pakistani government had reported that up to a foot of rain had fallen in eastern parts of the country Thursday.