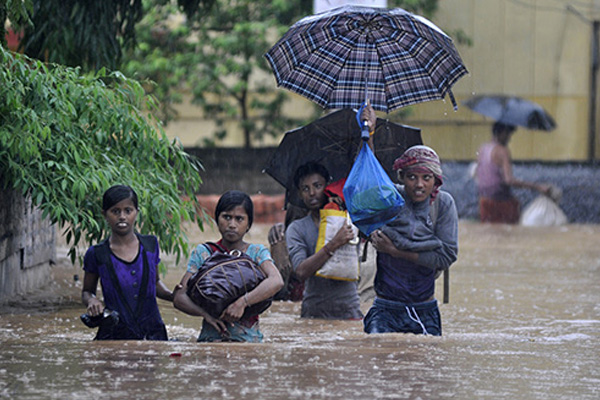 Guwahati, India (AFP) — At least 55 people have been killed and hundreds of thousands displaced in flash floods and mudslides in India’s northeast after days of heavy rain, local authorities said Wednesday.

The chief minister of the northeastern state of Meghalaya, where 35 people have died, said the floods were the worst in recent memory, and bad weather was hampering the rescue effort.

“So far, 35 people have died in separate cases of drowning and landslides in the last two days with more than 20 more still missing,” Meghalaya chief minister Mukul Sangma told journalists.

“We have put the entire region on a state of maximum alert.”

Adjoining Assam state is also on high alert after 20 people died in separate incidents of drowning and mudslides during three days of heavy rains.

Floods have hit several parts of Assam, with the main city of Guwahati particularly hard hit.

Hundreds of people have been forced up onto their roofs or even into the trees to escape the raging waters, one local community leader said.

Authorities in Assam estimate that 350,000 people have been forced to leave their homes due to floods.

“We are taking all relief and rescue measures in the flood-hit districts,” said Assam chief minister Tarun Gogoi.

Floods and landslides hit South Asia every year during the monsoon season. This year hundreds of people were killed and many more left homeless after devastating flooding in the Indian state of Kashmir.