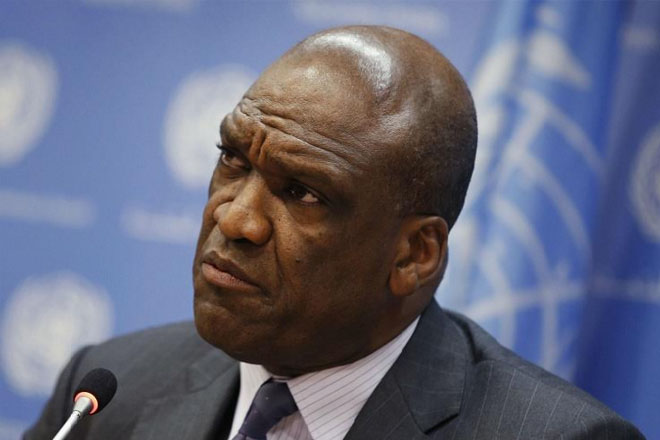 Former Antigua UN Ambassador charged in US in bribery scheme

New York, United States — Antigua’s former ambassador to the United Nations (UN) is facing charges in the United States (US) for his alleged involvement in a US$1.3 million bribery scheme in which a former Antiguan prime minister has also been implicated.

John Ashe, who served as president of the UN General Assembly (UNGA) from September 2013 to September 2014, was arrested yesterday at his home in Dobbs Ferry, New York in connection with the scheme that allegedly saw him receiving more than US$1.3 million in bribes in 2013 and 2014, in exchange for supporting Chinese business interests – some of which he shared with a former Antiguan prime minister.

The 61-year-old has not been charged with bribery, however. The 61-year-old Antiguan citizen, who has permanent residency in the US, is facing two counts of filing false federal tax returns.

Bribery and bribery conspiracy charges have instead been lodged against five others, including Deputy Permanent Representative to the UN for the Dominican Republic Francis Lorenzo, who allegedly facilitated the payments.

“As alleged, for Rolexes, bespoke suits, and a private basketball court, John Ashe, the 68th President of the UN General Assembly, sold himself and the global institution he led. United in greed, the defendants allegedly formed a corrupt alliance of business and government, converting the UN into a platform for profit,” U.S. Attorney Preet Bharara said in announcing the charges.

“If proven, today’s charges will confirm that the cancer of corruption that plagues too many local and state governments infects the United Nations as well . . . We’re looking at a lot of things, and I wouldn’t be surprised if you would see other people charged.”

According to the allegations contained in the complaint unsealed in Manhattan federal court yesterday, since 2011 Ashe had been soliciting and accepting bribes from various businesspeople in China seeking to influence the actions of the UN and officials in Ashe’s home country of Antigua.

He is said to have taken over US$500,000 of bribes from Ng, who was seeking to build a multibillion-dollar, UN-sponsored conference centre in Macau, China, to submit a document telling the UN secretary general that the centre was needed.

Ashe also allegedly received over US$800,000 in bribes from various Chinese businessmen to advocate for those individuals’ interests within the UN and with senior Antiguan government officials, including the countries then prime minister. Ashe, prosecutors said, gave a portion of that money to the then Prime Minister of Antigua and sent more funds to other Antiguan political interests. Although he was not named, Baldwin Spencer was Antigua’s leader at the time.

According to the complaint, during the course of the scheme Ashe solicited and received bribes in various forms, including cash and payments to third parties to cover his personal expenses, such as a family vacation and construction of a private basketball court at his house in Dobbs Ferry. He transferred the bribery money to his personal bank accounts, primarily through $25,000 monthly cheques he wrote to himself for a purported salary, although he already collected a salary from the government of Antigua.

The complaint also pointed to Lorenzo paying Ashe’s wife $2,500 per month as a climate change consultant for the NGO.

During that time, Ashe failed to report sufficient income to the Internal Revenue Service (IRS) to account for the income he was deriving from his purported salary payments and his “consulting” contracts. In total, he and his wife underreported their income to the IRS by more than $1.2 million in tax years 2013 and 2014 alone. Specifically, for year 2013, they underreported their income by approximately $462,350 and, for year 2014, they underreported his income by $796,329.28.

Each of the two charges Ashe faces carries a maximum penalty of three years in prison.

After his arrest yesterday, the diplomat appeared in court where a $1 million bond was set. Under the conditions of his release, Ashe is subject to home detention and electronic monitoring, and must surrender his travel documents.

The allegations against him and the other five have left UN Secretary-General Ban Ki-moon “shocked and deeply troubled”.