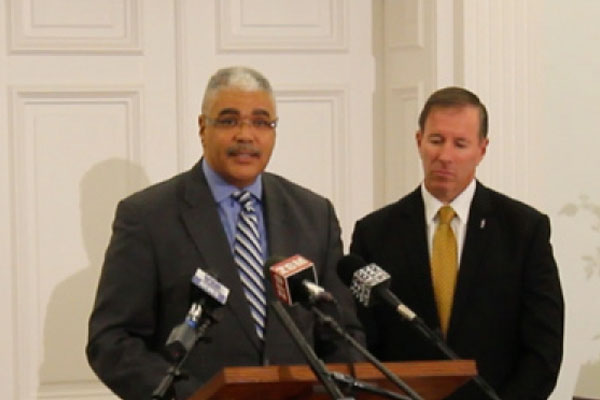 Hamilton, Bermuda — Former premier of Bermuda, Craig Cannonier, said on Thursday he was pleased to be rejoining the Cabinet, adding he was grateful for Premier Michael Dunkley having confidence in him. However, the opposition Progressive Labour Party (PLP) said Cannonier’s appointment displays poor judgement by Dunkley.

Wayne Scott, former minister of community, culture and sport, was sworn-in as the new minister of education.

The move coming, according to Dunkley, in the wake of the increasing responsibilities of former education minister, Dr Grant Gibbons, who is focusing on the 2017 America’s Cup.

Also being shuffled is Patricia Gordon-Pamplin from ministry of works to community, culture and sport, with Cannonier taking over Gordon-Pamplin’s former ministry.

The PLP said a press statement:

“Craig Cannonier’s appointment to the Ministry of Works and Engineering represents extremely poor judgment by Premier Dunkley and an endorsement of the dubious conduct that led to Cannonier’s disgraceful exit from the office of premier.

“Let us not forget:

“That the JetGate scandal that drove Craig Cannonier from office is still under police investigation.

“That Craig Cannonier violated the Ministerial Code of Conduct

“That the results of the OBA internal investigation into the $350,000 backroom deal with casino developers was never made public, as was promised by then OBA chairman Thad Hollis.

“That the OBA’s internal investigation into serious allegations of pay to play was sabotaged by the leadership of the OBA who refused to permit OBA Cabinet ministers to be investigated and led to the resignation of then OBA chairman Thad Hollis.

“Premier Dunkley’s decision to place an individual with unresolved criminal investigations relating to corruption at the head of one of the most important government ministries, involving millions of dollars in contract is foolhardy and reckless and brings into question his own judgement.”