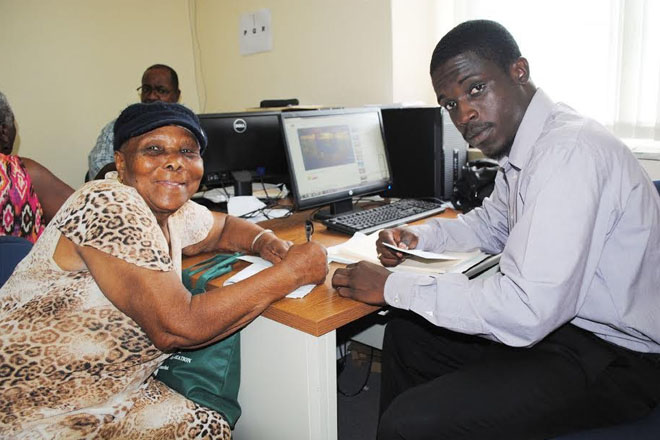 Former sugar worker says she got first pay-out, besides pension, because of PM Harris

Basseterre, St. Kitts — Her birth certificate indicates that she was born on December 11th, 1937 in the Parish of Christ Church. It was a Saturday. She is not exactly sure, but says that she started working in the sugar industry at Lodge Yard at age 18.

While she was not sure when she started working, Ms Jane Elizabeth Wilson is crystal clear that she was sent packing (she calls it – and rightly so – retirement) on attaining age 62, which was on December 11th, 1999. It was a Saturday.

She would have worked for a total of 44 years. Asked how much she was paid after working for so many years, she flashes her signature smile and says: “They called me at Social Security and they started giving me $250 dollars. That was my pension.

“There was nothing to celebrate about the money because when I reach 62, one of my grandsons gets knocked down and he was in the hospital and all I get is $250 pension.”

She laments that this came in the background of the fact that she had worked under very hard conditions on the sugar lands where she used to plant and cut cane, drop soda (some form of manure) and weed grass.

“When you have to drop soda it a kit and you pitch it all about the cane, and when the rain fall you had to work,” recalls Ms Wilson. “You are working and clothes wet, and sometimes the tractor driver comes late and we get home in the dark. Sometimes I do get sick and I work and work.”

The progressive daughter of the soil she is, her lowly position working on the sugar fields did not stop her from building her own life. She bore 12 children of whom nine are still alive. She was afforded land at Lodge by Premier Bradshaw, and Minister Constance Mitcham guided her through the legal process where she was able to acquire funds from the Development Bank to build a five bedroom house.

An expected windfall was blown away by the wind before it could have hit her. Many other persons who would have toiled in the sugar industry like she did benefitted from the windfall.

“When the sugar industry closed, I was not paid, no more than pension,” states Ms Wilson. “No other than the pension, and then the government rise it to 400. Because I was getting the 400, not a penny from the (2005) pay-out, and I had to work hard because I had my children.”

Almost ten years down the road, another windfall manifested itself and this time it blew in her direction and Ms Jane Elizabeth Wilson was smiling all the way to the Sugar Workers Restoration Fund offices to collect her cheque and smiled all the way to a bank to deposit the cheque.

The fact that a number of persons are claiming that they were not aware of the second pay-out, which was a gratuity, Ms Wilson was asked how she got to know that there was money available for the former sugar workers.

“Because I hear Timothy says so,” says Ms Wilson. “Timothy came and said that he is going to help me, and he is going give back sugar workers their money. When this happened, I went to the SWRF office and I filled out the forms.”

She was of course talking of the Prime Minister of the Federation, the Hon Dr Timothy Harris, who during the campaign period for Team Unity promised that if elected to government they would ensure that former sugar workers would be compensated.

After Prime Minister Harris would have secured the EC$16 million grant from the Government of Venezuela, Ms Wilson says that she heard it on the radio and TV that all aggrieved former sugar workers should go and fill out the forms, and does not understand how people could not have heard those announcements which were aired on a daily basis.

“I thank the Prime Minister – I now have the cheque,” says Ms Wilson. “I will make out with what I have because it is better than nothing at all. People who done get their pension did not get money. This is the first money I ever get beside my pension.

“I am happy for what Dr Timothy Harris did to all the sugar workers who suffered like me and were not paid anything. I didn’t have any bank account. I had a bank account long time, but when I was getting this house, I had to take it off… I am happy because one of my daughters assisted me to open a bank account.”