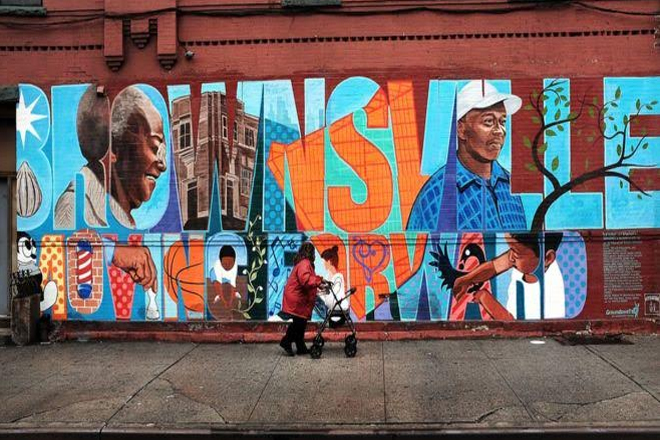 (BBC) US police in New York City have detained four teenagers and are seeking a fifth after a woman was gang raped at a playground.

The victim’s father was with the 18-year-old woman before the assault, but he was forced to flee at gunpoint.

The father ran for help, but the suspects had fled by the time two police officers arrived at the scene late on Thursday night.

What happened on the playground?

The father and daughter were drinking a beer on the playground in Brooklyn’s Brownsville neighbourhood when the teenagers approached them, an unnamed police official told the New York Times.

After the father fled at gunpoint, he found two police officers on patrol after 20 minutes of searching.

By the time they reached the playground, the suspects had fled, having each raped the young woman.

Some have questioned why it took so long for the father to find help in a densely populated neighbourhood. Police said no one called 911 to report the attack, the Times reported.

The victim was treated at a local hospital and released.

What do we know about the perpetrators?

On Saturday, police tweeted “We need your help finding 5 males wanted for raping an 18y/o girl in Bklyn” and released a video of the suspects entering a shop before the rape.

A day later, police said that they had the four suspects in custody, with charges pending.

It is unclear how the teens had obtained the gun and whether the weapon had been recovered.

And how is the community reacting?

According to the newspaper, residents say the playground is a dangerous place, and the attack has “set off waves of fear and uncertainty” in the area.

On Sunday, at least one community activist encouraged residents to get involved in the case.

Activist Tony Herbert told neighbours, “get up, get outraged, and identify these individuals that we see in the video that’s being provided by the NYPD,” according to CBS New York.

The police department’s handling of the case is also being question, with one local official saying that the police did not notify the public of the attack soon enough.

The police have said that their public notification followed standard procedure.