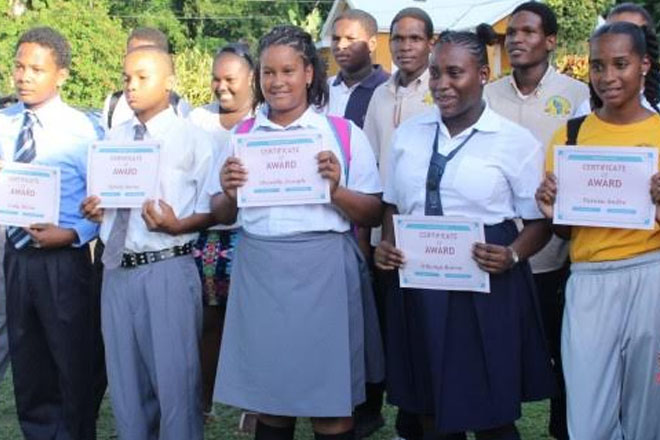 Fourteen get scholarships from Canada-based foundation

(Dominica News Online) The educational journey for some 14 students from across the island, who were either affected by the passage of Tropical Storm Erika or in need, has gotten a bit easier thanks to scholarships from the Canada-Dominica Scholarship Foundation (CANDO).

The scholarships, valued at EC$500, were on Wednesday presented to the students and their parents at the University of the West Indies Open Campus auditorium on Wednesday, December 2, 2015.

Member of the Canada-based organization, Justice Irvin Andre said Dominica was given preference over Canadian students of Dominican heritage, who the organization normally help, due to the effect the storm had on the country.

He said in this day and age, no student should be facing financial hardships for their education.

“My view is that in the 21st century no student should have any financial difficulty or impediment to getting a good education,” he said.

The Dominican-born Justice said the foundation is aware of the impact that the storm had on communities, homes, jobs and, as a result, the task of educating children has been made more difficult.

“CANDO is a little organization which we started in 2011 and each year, from 2011, we presented four or five scholarships to Canadian students of Dominican heritage in Canada, students who unfortunately have some difficulty financially in their lives,” he explained. “So we made a decision this year that instead of giving the scholarships to Canadian students who even though they face difficulties but the difficulties they face are not as challenging as some of you.”

Andre explained that a family from Yampiece was selected based on need and the other recipients were directly affected by the storm.

“So we made a decision to give those scholarships and some more to Dominican students,” he added.

One of the recipients, Whitney Baron from Petite Savanne, thanked CANDO for the gesture.

“On behalf of myself and the other students receiving the scholarships today, I would like to express thanks and gratitude from deep within my heart,” she stated.

“This award means a lot to us, especially when you consider the tragic incident of the not so distant past where we lost most and in most cases all of our possessions.”

She added that the scholarship will assist them in their upliftment as well as the country.

“In addition, I would like to assure you that the contribution you have given us towards our education will go a long way in the development of ourselves for our future and that of our country,” she said.

CANDO’s aim is to provide assistance to disadvantaged young persons to realize their academic goals. The membership consists of Dominicans residing in Canada and persons who have some association with Dominica or its citizens.