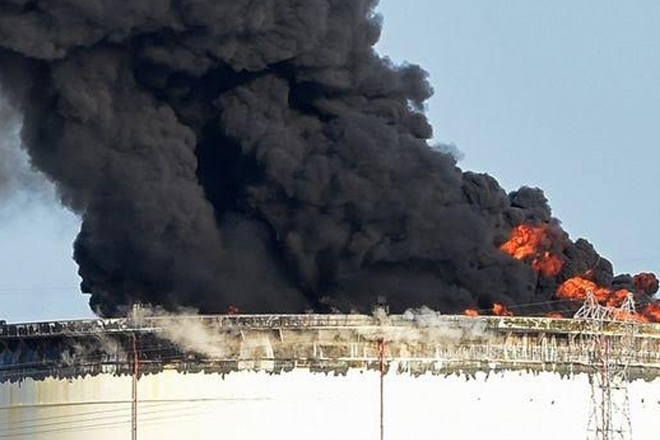 (BBC) — An electronic device has been found by investigators near a petrochemical plant in southern France, where two tanks caught fire after explosions on Tuesday, reports say.

A malicious act was already suspected by authorities because the two tanks were 500m (1,600ft) apart.

The fires were visible a long distance from the plant at Berre L’Etang.

Police sources told French media that they were analysing an electronic device that could start a fire.

Interior Minister Bernard Cazeneuve was said to have responded to the fires by warning regional officials to step up security at sensitive sites across France.

Anti-terror officials in Paris were keeping a close eye on the investigation, a week after explosives and detonators were stolen from a military site at Miramas, little more than 20km (12 miles) away.

Prosecutors in the nearby town of Aix told local media that suspicious items had been found but they were badly damaged and had been sent for analysis.

Holes in the perimeter fence near one of the tanks were also being investigated.

Officials were keeping an open mind about the fires but were not looking at any link to Islamist militants at this stage, Liberation website reported (in French).

Two tanks were set alight after the explosions at the site run by LyondellBasell, a multinational company with headquarters in the US and the Netherlands.

One was filled with petrol and the other with naphtha, a highly flammable distilled liquid distilled from petroleum.

No-one was hurt and firefighters dealt with the petrol fire quickly but took hours on Tuesday to bring the naphtha tank blaze under control.