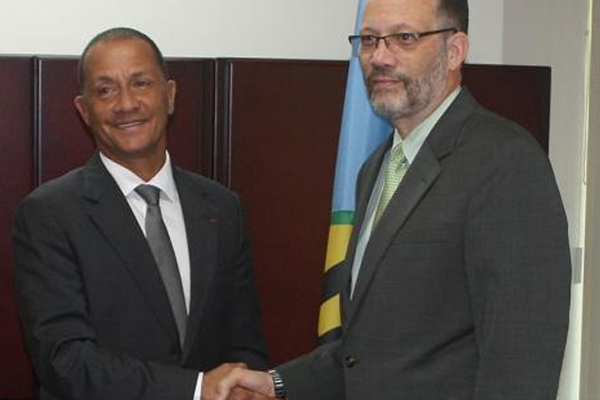 Georgetown, Guyana — Caribbean Community (CARICOM) Secretary-General Irwin LaRocque met on Thursday with a team from French Guiana led by the president of the Regional Council Rodolphe Alexandre, as the French territories in the Caribbean begin discussions with CARICOM on their applications to become associate members of the Community.

This followed a meeting on Wednesday with a team from Martinique and will be followed by similar discussions next month with representatives of Guadeloupe.

The discussions on Thursday focused on the terms and conditions of associate membership of CARICOM, regional cooperation in the Caribbean and the relationship between CARICOM and French Guiana.

The secretary-general also received a presentation on the geographic information system developed in French Guiana, using satellite and internet technologies.

The French Guiana delegation also held discussions with the CARIFORUM Directorate during the visit.

LaRocque said that the discussions followed on a mandate from the CARICOM heads of government to engage the territories. He told the delegation that “we are all part of the Caribbean” and their application was receiving serious consideration.

Alexandre said his territory strongly believed in the convergence of the Caribbean in economics, health and education. He noted that French Guiana had already engaged with Trinidad and Tobago on energy issues and Suriname with respect to mining and was also involved with the Community on issues of climate change and bio-diversity. The Council president also referred to a project to provide a satellite to boost to the digital capacity of the region.

Apart from the French territories, two of the former Netherlands Antilles, Curacao and St Maarten, have also applied for associate membership. Initial discussions have already taken place with Curacao.