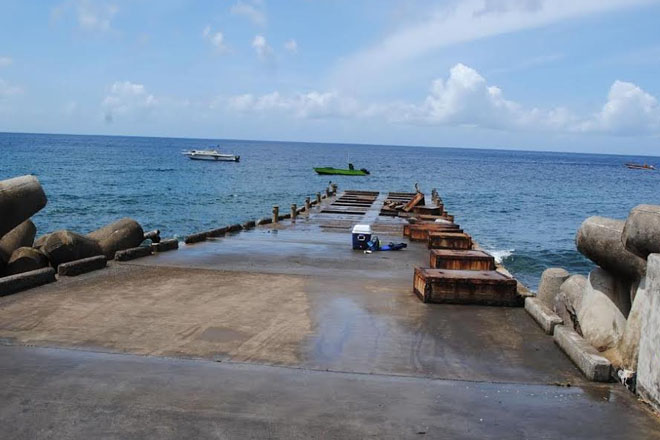 Basseterre, St. Kitts — Residents of Old Road, and fishermen in particular, have something to cheer about following the announcement made by their area parliamentary representative that work on one of his campaign promises would start shortly.

The Hon Lindsay Grant, who is also the Federal Minister of Tourism, International Trade, Industry, and Commerce made the announcement at the second in a series of town hall meetings for Constituency Four that was held at the Methodist Church Hall on the evening of Wednesday April 8.

A speaker at the town hall meeting had raised the issue of the jetty which was damaged by a weather system, and those presented clapped in appreciation when Minister Grant gave the answer. Another speaker asked if the fishermen would be consulted before the work commences.

“We are going to have discussions with the fishermen prior to work being done for them to understand what is being done, and so that they can be comfortable with the work that is being produced,” replied Hon Grant.

Candid discussions were held between the scores of participants and their parliamentary representative. He gave them answers that left them satisfied, even when he told them that some of the requests would take a little longer to be fulfilled.

Community members told Hon Grant that they want sporting activities revived in the area to which he said that having been a football player for Ghetto Stars, he would do his best. He however told them the organisation of football league games is a private issue and clubs should be the ones to do it.

“I would say in terms of sporting facilities and the communities, the persons in Half Way Tree were crying out for a long time because they did not have any lights down there on the pasture in Half Way Tree,” observed Hon Grant.

“If fact the information I got is that they were asking for some lights for almost three years, and they could not get any lights, and I must tell you that within 30 days of me assuming this position, the folks down in Half Way Tree now have lights on their field.”

He advised that they were in the process of working on lights at the Verchilds basketball court where only one light was working and they needed two or three more lights, and that it would be done within the next seven days.

Two taxi drivers who had attended the town hall meeting Mr Ashton Davis, and Ms Veronica Elizabeth Bernier pointed out that Old Road was the oldest town not only in St. Kitts but in the entire English speaking Caribbean, noting that the first English governor was resident in Old Road. They said that more should be done to enhance the town’s tourism appeal.

“I agree with you that we need to put our heads collectively together,” replied Hon Grant, who is also the Minister of Tourism. “One thing I can say is that in the short amount of time I have had the opportunity to lead this ministry there is a lot of talk about sustainable tourism development and I think they are getting away from a lot of these sun, sand, and sea business.

“They are really going into the uniqueness of tourism products, not only in the Caribbean but beyond, and Old Road and St. Kitts in particular provides a unique opportunity. Historically I believe we are one of the major players in the Caribbean in terms of our history, and so we need to preserve that.”

Minister Grant invited Mr Maurice Widdowson, owner of the world famous Old Road-based Caribelle Batik to give his views, which he did even though he at first told the Minister that he had come to the town hall meeting to listen.

Other matters raised included the Old Road Bay which poses a major problem, and Minister Grant agreed that it was dangerous to ply the route but advised that it would take a significant amount of money to have it fixed and it being a capital expenditure project some investigations would have to be done including bringing in of experts.

When one of the speakers pointed out the Old Road Community Centre is in a deplorable condition, Mr Grant said he was aware of it and advised them that that was the reason why the town hall meeting was held at the Methodist Church Hall.

“They just painted it up,” said Hon Grant. “The edifice looks nice from the outside, but the inside is in a bad way. It is suffering under the effects of moulds right now and woodlice eating out the whole thing.

“I can’t imagine that we could have a building deteriorating in front of everybody’s eyes and nobody is paying any attention to it. We are going to deal with that matter very, very quickly to ensure that the building does not deteriorate further.”

A number of speakers raised concerns that drains in the Old Road area are not being cleaned and some suggested that PEP workers are not doing what they are supposed to do, yet they are being paid.

“I am almost certain the government is paying someone to clean the drains,” said the Hon Grant. “Unfortunately people are not doing an honest day’s work for an honest day’s pay… I am saddened to say that, and part of the problem is this thing what we have introduced called PEP is spoiling the work ethic in some regard because people feel they could work three hours and get eight hours’ pay.”

Questions on VAT were also asked, and what would be done if merchants put up prices of items VAT had been taken off, and Hon Grant said that the matter fell within his ministry. He explained that staff in Consumer Affairs had been given a directive to assess goods on shelves prior the VAT day. The ministry also talked to supermarkets owners who were reminded that they should not increase prices of goods after VAT would have been removed.

“They (supermarket owners) assured us that they would not (increase the prices),” stated Hon Grant. “We indicated to them the penalties that are on the books and the penalties that we would vigorously enforce if anything was done. I have not heard for myself any major infractions in terms of the price gouging, so to my mind that is going relatively smoothly.”