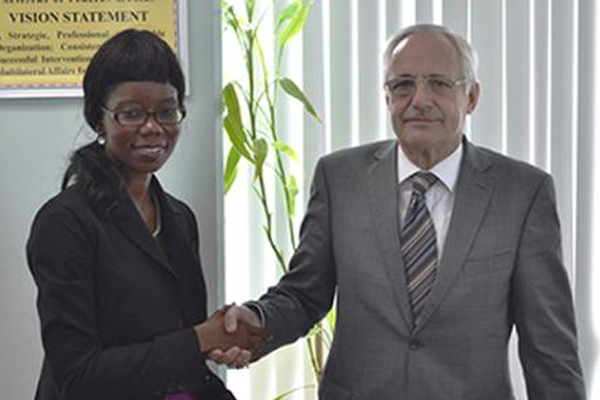 St George’s, Grenada — Dr Michael Freudenberg, deputy head of mission of the German embassy in Port-of-Spain with responsibility for Grenada, made a special visit to Grenada from February 4 to February 9. Aside from participating in various meetings, including the zero-hunger pledging conference and events to celebrate Grenada’s 41st anniversary of independence, Freudenberg met with the ministry of foreign affairs to hand over a note verbale by the German ministry of foreign affairs that announced a new and important project in the energy sector.

The project with the title “Reform of the Electricity Sector to support Climate Policy in Grenada” (G-RESCP) will commence this month. The goal is to support Grenada in the use of renewable energy and its reduction of CO2 emissions via institutional amendments to allow for more investments in renewable energy and energy efficiency.

In the meeting with Patricia Clarke, permanent secretary of the ministry for foreign affairs, Freudenberg stressed, “Grenada has great potential for renewable energy and hence a unique opportunity to reduce its carbon footprint.

“Germany is happy to support reforms in the energy sector to allow Grenada to reap the benefits of this potential resource. By doing this, Grenada can lead the way for small island states in amending institutional structures to follow the path of a sustainable society.”

G-RESCP will be implemented by the German Agency for International Cooperation (GIZ), in close collaboration with the government of Grenada.

This new project is the second project in Grenada funded by the German ministry for environment. The first project, the “Integrated Climate Change Adaptation Strategies” (ICCAS) programme, was launched in April 2013 and has a volume of approximately EC$16 million (5 million Euros). ICCAS’ objective is to increase resilience of vulnerable communities and ecosystems to climate change risks in Grenada.

It was noted that although the ICCAS project is not even at its halfway mark, it has left a recognizable imprint across various sectors in Grenada.

The key role of BMUB as a donor and GIZ as implementer in the reactivation of the National Climate Change Committee the development of a coastal zone policy for Grenada, Carriacou and Petit Martinique and the training of public officers in the use of a climate risk assessment tool, which helps to make climate-smart decisions received high commendations from Merina Jessamy, permanent secretary with responsibility for agriculture, lands and the environment, who works closely with the ICCAS project.

Additionally, ICCAS is currently starting a rainwater harvesting project, a climate-smart agricultural project, as well as a community-based reforestation campaign which includes the protection of mangroves. Recently, ICCAS also produced a climate change music video with three young Grenadian artistes (Swipe, Eclipse and Avonni) who performed the song “Can’t do it alone”, which is available on YouTube for viewing.

At the end of 2014, as part of ICCAS a Community Adaptation Fund with a budget of EC$3.3 million was created, which will assist non-government organisations to implement projects that will mitigate the negative impacts of climate change in their communities.

The United Nations Development Programme (UNDP) is in charge for the implementation of this key financing instrument to combat climate change in communities. The first round of community-based adaptation projects will be approved in upcoming months.

Freudenberg also mentioned that the new energy project will build on the groundwork of the existing climate change initiative, and extends the scope from climate change adaptation to mitigation of greenhouse gases which contribute to climate change.

Grenada is the first country to receive such comprehensive climate change focused support, which is also a component of other regional projects such as the “Caribbean Aqua-Terrestrial Solutions (CATS)” project based in St Lucia, and the regional renewable energy projects based in Guyana and St Lucia.

This impressive list of projects shows the importance of Grenada to Germany as a front-runner in the fight against climate change. While the groundwork done by the German projects puts Grenada in an advantageous position to receive additional large-scale funding, e.g. from the Green Climate Fund, it also means that the international community will look closely on actions on the ground in Grenada, and the progress made to inform the resilience-building measures of their own efforts.