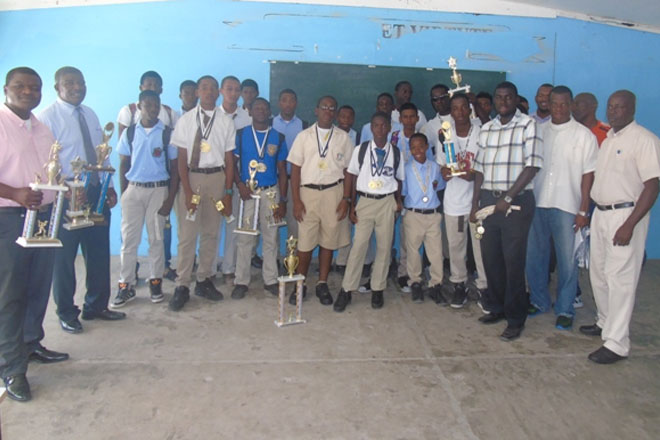 Sports Page — Ross Powell received his award as the MVP in the 2015 Giant Malt sponsored Federation High schools’ cricket tournament, to loud shouts from his school mates at the Charlestown secondary School.

The ceremony was held the school during the morning assembly period on Wednesday 6th MAY.

Mr. Guishard in addressing the gathering, congratulated all of the players and noted that the standard of play throughout the tournament was extremely high. He however had special commendation for Shelton Forbes of the CSS team, as he described his century in the finals as the best innings of the tournament.

He also presented long outstanding trophies to the deserving schools as follows:

He then made the presentations for the 2015 top teams:

Presentations were also made to the top bowlers; batsmen and the top wicketkeeper in the competition.

Team members of the Washington Archibald High school were also present to receive their awards.