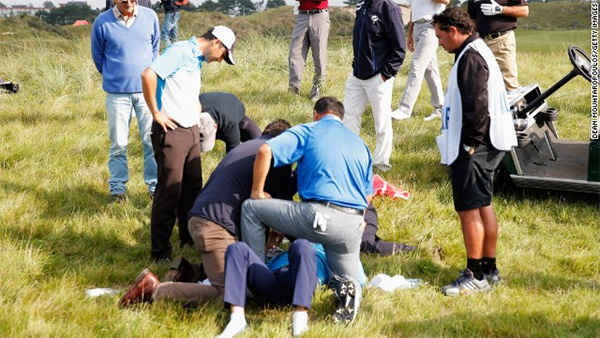 (CNN) — You would think that fans watching a golf tournament on site would be more susceptible to being hit by an errant ball than a golfer but that wasn’t the case at the KLM Open in the Netherlands on Thursday.

In a rare occurrence, Paraguay’s Fabrizio Zanotti was struck on the head and was taken to hospital as a “precaution,” the European Tour said.

He was receiving treatment but was okay, the Tour added.

“The latest report from hospital is that all neurological tests have come back clear,” the Tour’s tournament director, Miguel Vidaor, told the European Tour’s website. “We wish Fabrizio a speedy recovery.”

The 31-year-old Zanotti — who earlier this year became the first Paraguayan to win on the European Tour — was on the 16th fairway when he was hit by Alexandre Kaleka’s shot from the 14th tee.