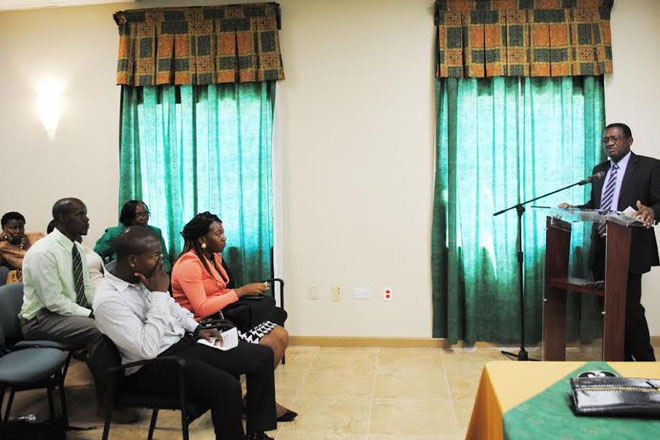 “I know from the ministerial standpoint that we have some work to do, because you work in this institution and a lot of you do not know even yet what benefits are to be derived when you get to the point of retiring,” pointed out Minister Hamilton.

“There comes a point in time in life when you reach that plateau and then you start to decline, and it is during that period of decline that we really need to know what benefits are there to be able to help to take us through life until God says He is ready for us.”

The Hon Eugene Hamilton, who is the Minister of Agriculture, Health, National Health Insurance, Human Settlement, Community Development, Gender Affairs, Social Services, Cooperatives and Lands, made the remarks when he addressed Solid Waste Management Corporation’s General Assembly held at the conference centre of the institution’s new headquarters in Taylor’s.

“And so, yes, as a government, we have to consider the benefits that come to you,” assured Hon Hamilton. “Not only pension benefits, but also your health benefits as well.”

The General Assembly was held under the theme ‘Reaching Outward’, and according to Minister Hamilton it was an important assembly and he told the 71 persons who work for the institution that they should be proud of the management team that brings them together to get the best out of those who contribute to the institution.

“I want at this point to thank the new directors who have accepted the responsibility to work with this institution, and knowing, in very difficult times,” he said of the Board Members who were attending their first function organised by the institution they will be overseeing.

“Let me also say a big ‘thank you’ to the management team who have worked very hard on producing this edifice which is your new home. This is indeed, perhaps, the best example of what you are trying to achieve by this very programme that you are having today.

“I think in St. Kitts and Nevis, in St. Kitts in particular, whenever you hear about Solid Waste it is always positive, always positive. Solid Waste has a very good reputation because of you and all of you – you go out and make your contribution. But so that we can be much better, I am saying to you: Work together for the good of the country.”

Chairman of the Board Directors, Solid Waste Management Corporation – SWMC (St. Kitts) Mr Randolph Edmeade, said that the General Assembly gave him and members of his board the opportunity to see the extended staff of the corporation.

“As the chairman of the board, my board has the responsibility for ensuring that the decisions that need to be taken to ensure that the Solid Waste Management Corporation functions and functions not only for the benefit of St Kitts and Nevis, but functions for your benefit also,” said Mr Edmeade.

“The Minister would have mentioned some of those areas which I can tell you that as soon as we started work, that they were placed on our lap – staff welfare, benefits and those things. So they will be given priority. I will ensure that the Board does what it has to do so that the corporation goes from strength to strength and ensure that all workers’ welfare continues to be priority.”

By way of introduction to the members of the staff, the new chairman said that he was not entirely new to the corporation because in his capacity as the Director of Department of Physical Planning and Environment he would have had reasons to deal with the corporation.

“My training is in the area of environmental science and environmental management, and because of that I have been with the board assisting in that regard,” said Mr Edmeade. “So I am not new to the entity, but I am new in this capacity as Chairman.”

The General Assembly’s Facilitator was Mr Denzil Crooke, the CEO and Principal with Quantum Consulting, who told the assembly that he had developed a passion that allows him to be able to help persons to understand that what made efficiency, “is a function of development of each individual which comes with efficiency irrespective of the organisation.”

“Although this institution has coined the expression of ‘reaching outward’ and has set it second to ‘looking inward’, and subsequently ‘projecting forward’, the real essence of reaching outward must begin in the heart of each and every employee,” advised Mr Crooke.

“The expression of reaching outward is only a manifestation of us looking inwardly. In other words, you can only give what you have gotten. If you join forces with the institution to impact people reaching outward, let us first pay attention to ourselves and look inwards.”