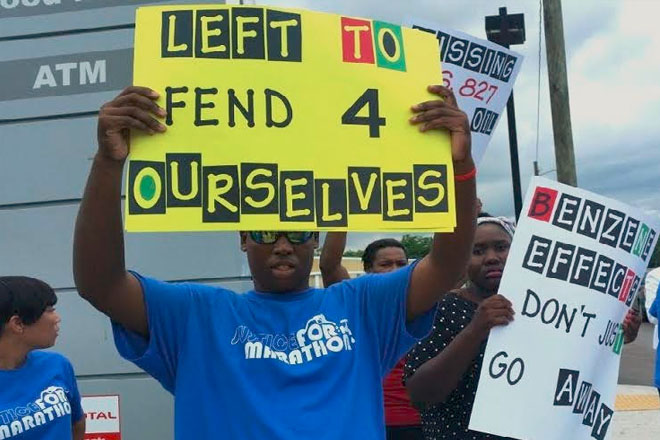 Nassau, Bahamas — The head of environmental group Save The Bays (STB) Vanessa Haley-Benjamin has accused government of displaying poor judgment and giving false hope to residents by releasing incomplete findings on the health risks associated with the Rubis fuel spill in their community.

Lending her support to a protest by residents of Marathon, Nassau, outside the fuel station, the STB chief executive officer said authorities were wrong to tell residents they had nothing to fear from the toxic chemicals they were exposed to for as long as two years, because the medical tests were far from complete – and likely to be less than conclusive when they eventually are.

“The release of these premature results is unfortunate,” Haley-Benjamin said. “The government clearly jumped the gun. In reality, there is no satisfactory way, in the short term, to verify conclusively whether a person has been exposed to low levels of certain chemicals – for example, benzene.”

In January 2013, it came to the attention of Rubis and the government that the fuel station on Robinson Road in Marathon had leaked around 24,000 gallons of gasoline into the ground. It was subsequently confirmed that the leak led to the contamination of a wide area of groundwater, including the water supply to several homes, and residents have reported a range of health problems.

Haley-Benjamin noted that, according to Dr. van de Weerdt, toxicologist and consultant with the Pan American Health Organization (PAHO), while the preliminary results may be encouraging, it remains important to establish a complete picture of the situation, both in terms of completing the health risk assessments and being in a position to reassure concerned citizens.

“The government should not be in the business of communicating simplified versions of this very serious situation to the public,” she said.

“With regard to the 223 persons tested, more information is required to understand the extent of the evaluations and if those tested are representative of both the original and possibly any newly impacted areas. To date, we know that 17,000 gallons of fuel have yet to be recovered from the ground. Over time, the impacted area will grow as the benzene spreads with the natural flow of groundwater.

“Residents of this area are very concerned for their safety – and rightfully so, considering the known link between aggressive cancer and benzene exposure; and in light of the more than 20 recent cancer-related deaths in the area. Exposure to low levels of benzene can result in chronic health effects and take a longer period of time to manifest. This underscores the need for long-term medical surveillance by a medical practitioner to detect abnormalities during early onset,” she added.

Haley-Benjamin therefore called for a full report of the investigation by the Department of Environmental Health and PAHO to be compiled and released to the public, and said officials should refrain from making any sweeping statements until such time.