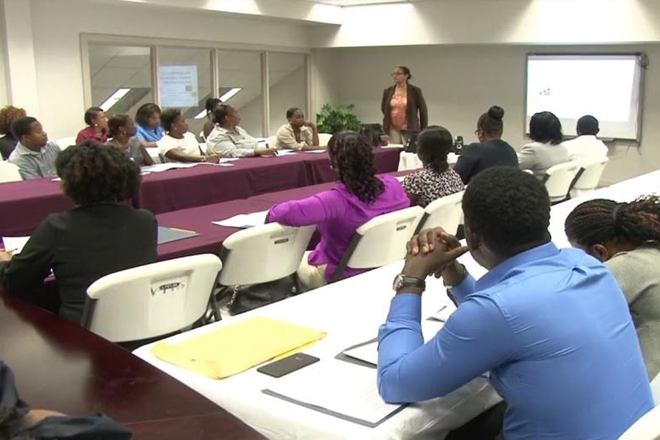 (SKNIS): In a thrust to increase the cadre of protocol officers in St. Kitts and Nevis, a total of 45 persons are being trained at a two-day seminar from August 25-26 at the Financial Complex in Basseterre. The training is categorized as an advanced Independence activity and is facilitated by the Governor General, His Excellency Sir Tapley Seaton, and Ms. Clarita Richards, career diplomat and former Permanent Secretary in the Ministry of Foreign Affairs.

The Honourable Senator Wendy Phipps, Chairperson of the 2016 Independence Planning Committee gave a breakdown of the participants and noted that the training was very important.

“Within the room of participants that we have for the two days of workshop are persons who would have had a basic understanding of protocol from the stand point of ushering and seating at various functions that the Government would have held over time,” said Senator Phipps. “There are also persons in the room for whom protocol is an entirely new area and I think based on how the curriculum has been structured, it would be evident by the time the two days would have been over that what we are trying to attempt is a more comprehensive approach to protocol.”

She noted that this new approach is not just limited to the traditional understanding of seating dignitaries at a function or performing a liaison role by going to the airport to meet a delegation or offering support services to those individuals while they are here and coordinating their departure.

“It is an opportunity for the participants to realize that protocol is a wide and varied discipline that includes appreciation of matters such as understanding cultural differences, what are some of the protocols that should be in place when gifts are exchanged between dignitaries, and what do certain gifts symbolize, what are the communication requirements, what about deportment and moods of dress,” she said. “And we found that some of these issues are things that people probably never considered to be contingent or part and parcel of protocol, but nevertheless, they are important and we would hope that at the end of the seminar we would have given a wider understanding to what the whole discipline of protocol training and the duties of a protocol officer really are.”

Making reference to protocol between states, facilitator Clarita Richards explained to the participants that where protocol is properly applied and properly practiced things should go smoothly.

“And it is very important. All relationships between states are based on mutual respect and mutual regard for each other’s situations and positions and so the protocol officer is key in ensuring that the atmosphere remains cordial during the operations of these relations,” said Ms. Richards.

The protocol officers are expected to test their new skills at this year’s 33rd Independence Anniversary celebrations. Over the years, protocol functions in St. Kitts and Nevis were typically carried out by the staff of the Ministry of Foreign Affairs.