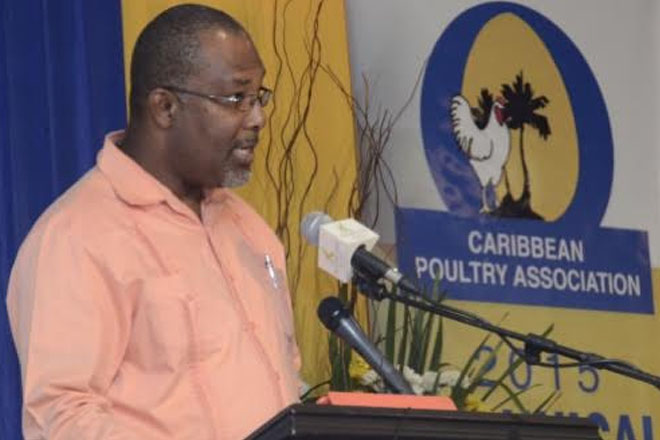 Kingston, Jamaica (JIS) — The Government has reaffirmed its commitment to partnering with key stakeholders in protecting the poultry industry from the avian influenza and other diseases, which threaten the sustainability of the sector.

The assurance came from State Minister for Agriculture and Fisheries, Luther Buchanan, as he addressed the opening of the Caribbean Poultry Association’s (CPA) Technical Symposium at the Knutsford Court Hotel in New Kingston today.

He said the Government recognises the importance of the poultry industry to the nation’s food security, and that this must be safeguarded.

“As policymakers, the Ministry of Agriculture and Fisheries, through our Veterinary Division, has been working closely with our private sector partners to protect our borders from this (avian influenza) and other diseases and we look forward to continued collaboration in this regard,” he said.

Avian influenza, commonly referred to as bird flu, is an infectious viral disease of birds (especially wild water fowl such as ducks and geese), often causing no apparent signs of illness. This virus can sometimes spread to domestic poultry and cause large-scale outbreak of disease.

CPA Board Member and President and Chief Executive Officer of Jamaica Broilers Group Limited, Christopher Levy, said the outbreak of avian influenza earlier this year, primarily in Mexico and the United States, brought to the fore, the key role the poultry industry plays in terms of food safety and security.

“The (infected) birds fly over Jamaica…the domestic birds that we all grow, whether, it’s the small farmers or the larger (producers), are not immune to this disease. It’s a big bio-security risk and thus it poses a great food security risk for our country,” he said.

Levy contended that the poultry industry is by far, the largest and most important agricultural sector in the region.

Citing statistics to support his claim, he noted that annual sales in the Caribbean amount to approximately US$650 million in terms of poultry and feed. In addition, more than 40 million dozen eggs, and over 3,000 tonnes of poultry meat are produced annually. The sector also directly employs over 200,000 people across the region.

He said countries in the region cannot afford to lose this food source, stressing that “we need to recognise how important it is for local production in each of our small countries to exist and grow and be profitable.”

Minister Buchanan noted that while significant strides have been made in increasing production of poultry products, “we still have some way to go before we attain self-sufficiency in the region.”

“Despite the gains made by the regional industry, a significant amount of broiler meat continues to be imported as reflected in the 2012 CPA trade statistics, which recorded imports of 130,382 metric tonnes,” he said.

Buchanan went on to commend local poultry farmers for their contribution to this increased production over the past four years.

In particular, he mentioned Jamaica Broilers and Caribbean Broilers, along with the contract farmers across the island, who supply on average approximately 65 per cent of the poultry meat produced by the industry.

The two-day symposium is being held under the theme: ‘Shaping Our Future for Sustainability: Facing New Challenges’.

It brings together more than 30 representatives of large poultry producers throughout the Caribbean region including local members of the poultry sector, to discuss the future of the industry.

President of the CPA, Patrick de Groot, said the annual symposium provides an opportunity for “us to focus on strategic issues that confront our industry”.

“It also provides a medium for intimate and open discussion between persons, who make Government policy and us, in the industry, who help to shape such policy,” he said.

As the regional representative of the poultry producers, the CPA promotes the interests of the industry to ensure sustainability, growth and further development.