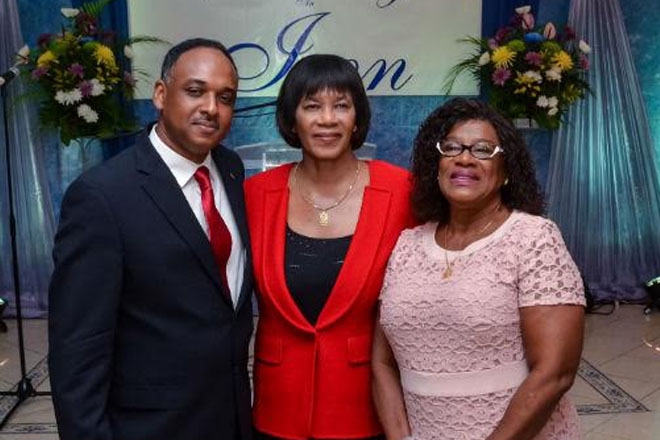 Kingston, Jamaica (JIS) — Prime Minister Portia Simpson Miller says the Government will continue to implement poverty reduction and alleviation measures in a bid to improve the conditions of the most vulnerable Jamaicans.

“We are working diligently to eliminate poverty through economic growth, job creation, the expansion of business ownership, the generation of wealth, and social programmes to benefit the most vulnerable,” she said.

Simpson Miller was speaking at a farewell luncheon in honour of former Managing Director of the Jamaica Social Investment Fund (JSIF), Scarlette Gillings at the Mona Visitor’s Lodge and Conference Centre in St. Andrew today (June 17).

The prime minister said poverty reduction continues to be a major concern of the global community, pointing out that a key United Nations Millennium Development Goal (MDG) is the eradication of extreme poverty and hunger across the world.

“As negotiations continue towards the post 2015 Development Agenda, Jamaica has been very vigilant to ensure that the required development financing is in place for developing countries to give support to their poverty reduction strategies. Such strategies are urgent and critical in the aftermath of the global recession, which has contributed significantly to poverty and inequality around the world,” Simpson Miller said.

The Prime Minister noted that JSIF, implemented in 1996, continues to be a central part of the Government’s integrated poverty reduction strategy.

“A vital part of JSIF’s mission, in the current socioeconomic policy framework, is to mobilise resources and channel them to community-based projects that will give Jamaicans the opportunity to improve their living conditions and earn a livelihood for themselves,” she pointed out.

She said that through a national partnership involving central and local Government, communities and private and public organisations, JSIF has been addressing the needs of communities in a manner that is effective, transparent and non-partisan.

“In keeping with its mandate, JSIF has continued to empower people and communities and ensure social development,” she noted.

The prime minister said JSIF is helping to attain the outcomes of the National Development Vision particularly as it relates to achieving: a healthy and stable population; world class education and training; effective social protection; safety and security; strong economic infrastructure; internationally competitive industries, among other areas.

She informed that the fund has helped to position Jamaica to contribute to the MDGs of ending extreme poverty and hunger; attaining universal education up to the primary level; improving child and maternal health; and ensuring environmental sustainability.

Paying tribute to the outgoing Managing Director for the sterling work she has undertaken at the fund for the past 18 years, the Prime Minister said “her efforts have been central to the national programme to alleviate and eradicate poverty in Jamaica.”

She said that under the leadership of Gillings, JSIF has empowered people and communities and ensured social development.