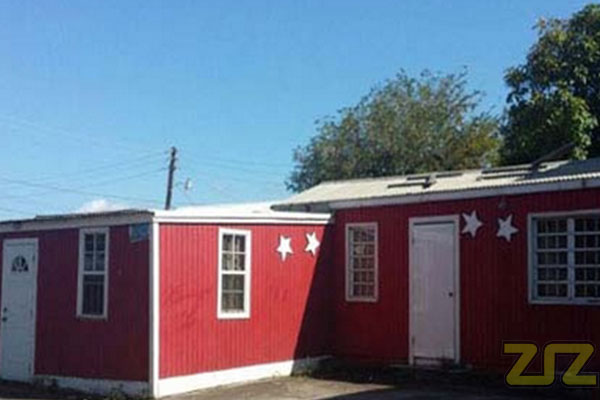 (ZIZ)– Police officers were called in yesterday to physically remove the People’s Action Movement’s Lindsay Grant and Jonell Powell from property owned by Val Morris, when the PAM operatives attempted to stop Mr. Morris from changing the locks on a building on the property and affixing a sign which said “private property, no trespassing.”

Scores of people congregated at the St. Kitts-Nevis Labour Party Constituency #3 Branch Office late Saturday, mostly in support of Mr. Morris, a well-liked and respected gentleman in the community. The general consensus among the crowd was that Sam Condor, Lindsay Grant and Jonell Powell were being vindictive toward Mr. Morris and that Mr. Morris was within his right to determine who should be able to access his property.

While Powell was reserved and dignified in his demeanor, though persistent that his political colleague, Sam Condor had rights to the structure, Grant, a lawyer, was openly belligerent. Condor was present for a brief time along with his wife but, at least in the latter part of the confrontation, did not play an active role in contributing to the already palpable tension.

The building at the center of the controversy formerly housed the St. Kitts-Nevis Labour Party Constituency #3 Office of Hon. Sam Condor, who has since defected to the opposition coalition.

Condor, though acknowledging the land as being the property of Val Morris, has insisted that he ought to be compensated for the plywood structure, which is visibly infested by termites, as it was erected with his personal funds.

Morris, on the other hand, has said that he gave permission for the property to be used by Condor in his capacity as the Labour Party candidate and not Sam Condor in his person. Additionally, when Mr. Morris was first approached about using the property as the location for the branch office, he advised that no structure was to have been built with a foundation as the land was one day to be passed on to one of his children.

Captain Morris spoke to the crowd to calm them and thank them for their support. In speaking, he briefly described what had happened earlier that day.

“There is no question that this property belongs to me; I got all the legal documents. There’s no question about that. The advice was to change the locks from my lawyer, and that we were doing this afternoon [Saturday May 3rd]. During the process, I saw Lindsay Grant, Jonell Powell and some other fellow and we asked them to leave.”