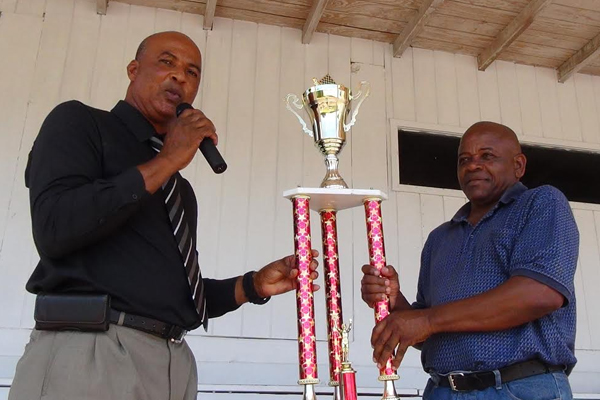 Green is first ever Draughts Champion in Nevis

The ceremony was held at the ET Willet Park and the presentation was made by Mr. Keith Scarborough of the Nevis Cultural Foundation.

The Foundation had organized and coordinated the first ever Draughts championship to be held on Nevis and the tournament climaxed on Friday 6th February with the grand finals.

Some nine players started in the preliminary rounds and it came down to semi finals between James Greene and Gary Claxton in a tight contest, which Greene won 3 games to 2.

The other two semi finalists scheduled to play were TEACHER from St.Kitts and Tamu Morton.

However, TEACHER did not show up and Tamu Morton got a bye into the finals.

It was a tough finals but Greene eventually prevailed, winning 3 games to 2, with two games drawn.

Greene used the opportunity to thank the Foundation for organizing the tournament and hoped that it will be an annual event.

He challenged other players to ‘put up their hands’ for the next scheduled tournament and encouraged young persons to learn the game, as it would help them with their concentration level.

Keith Scarborough assured that the event will indeed be an annual one from hereon.