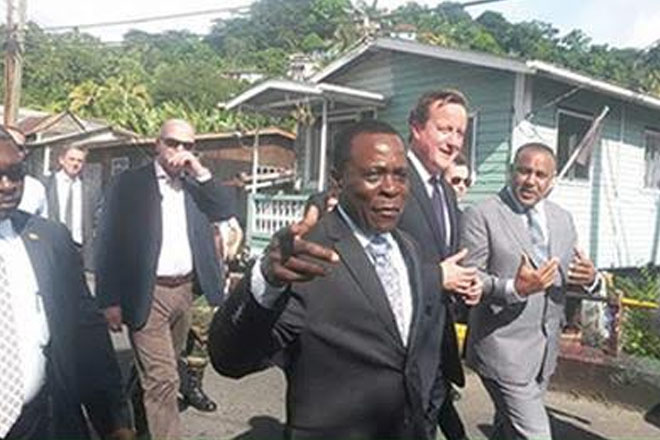 Grenada delighted with US$550 million regional support from Britain

St George’s, Grenada (GIS) — The government of Grenada said it is delighted with the proposed package of economic development from the United Kingdom to the region.

British Prime Minister David Cameron paid a visit to Grenada on September 30 and announced that his country has set aside an economic package of £360 million (US$550 million) for the Caribbean.

Prime minister of Grenada, Dr Keith Mitchell, who greeted his British counterpart at a reception at the Maurice Bishop International Airport, is elated.

“I am very happy, we have seen this. We have a number of infrastructural projects that are already written up and are ready to go,” he said.

Mitchell assured the nation that Grenada’s slice of the cake will be put to meaningful use and thanked Cameron for the timely assistance.

“The fact that we have 300 million pounds available to eight countries in the next five years and we do not have to repay that money, we are going to be up and running,” Mitchell said.

The British prime minister said the visit to Grenada is intended to re-establish the strong bond of friendship between Grenada and the United Kingdom, which goes back several decades.

“The visit is to say that I want this relationship to be reinvigorated, to be rebooted and I think there is a real opportunity to do that.

“The ties between Britain and Grenada and the Caribbean are very strong ties of history, of language, of culture of people of the many thousands of Grenadians and Caribbean people who have given to Britain,” he said.

Cameron said that the visit is a clear indication that the United Kingdom is renewing its friendship with Grenada and the Caribbean.

“This is to say we are back and this 300 million pound infrastructure fund is to say, let’s invest in your infrastructure and provide the roads, ports and the other infrastructure that is necessary for your economy and let’s start and reinvigorate this relationship,” Cameron said.