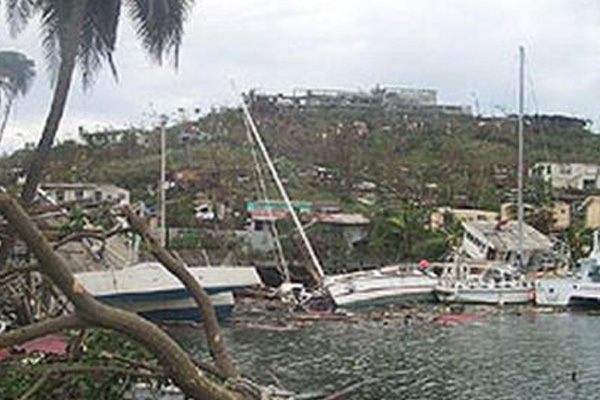 St George’s, Grenada — Sunday marked the ten-year anniversary of the devastation caused by Hurricane Ivan, which passed directly over Grenada on September 7, 2004, as a category three storm, killing 39 people.

The capital, St George’s, was severely damaged and several notable buildings were destroyed, including the residence of the prime minister. Ivan also caused extensive damage to a local prison, allowing most of the inmates to escape.

The island, in the words of a Caribbean disaster official, suffered “total devastation.” According to a member of the Grenadian parliament, at least 85% of the small island was devastated. Extensive looting was reported. In all, damage on the island totalled US$815 million.

Caribbean News Now senior correspondent based in Trinidad, Grenadian Marcia Braveboy, was the first journalist to arrive on the ground from outside the island and filed one of the first reports of what she saw and experienced: Special Report from Grenada: ‘Indescribable Ivan’

“As the first journalist on the ground at the time, it was a heartbreaking experience. One could have cut the sense of trauma with a knife, so palpable was the shock and fear people exuded,” she recalled.

“Grenada’s culture, some of its ways of doing things was gone with the vicious winds of Hurricane Ivan. Fishermen from Gouyave launched their boats out to sea and boarded the cargo boats coming into the country with aid and raided them of some of their goods. No one bothered to stop them.

“And as the people had no money, they took the opportunity to make some with the raided goods, selling a tin of corned beef and other canned foods for EC1 each. The few who had working generators charged EC$5 to charge a cell phone. So desperate were the times.

When the storm had fully passed and the dust settled, one could find Grenadians at the side of the road or in makeshift shelters talking and drinking their nights away for weeks following the hurricane,” Braveboy recounted.