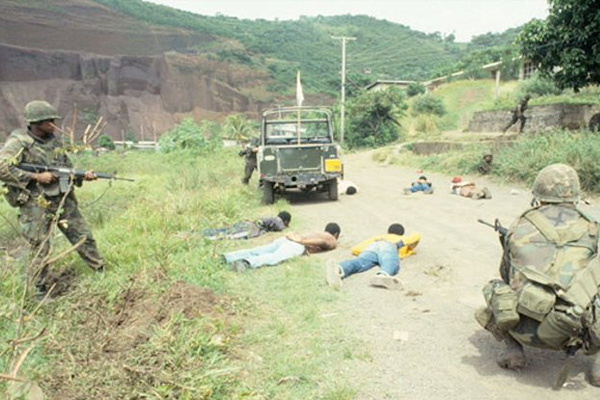 “The greatest tragedy of that historical episode is that we have failed to learn the lessons of that experience and even more disturbingly, succeeding generations seem to have no knowledge of what is without question, the most significant historical episode in the Caribbean in the 20th Century,” Skerrit said as he delivered the inaugural March 13th Lecturer” Monday night organized by the Grenada Revolution Memorial Foundation Inc. (GREMFO) and Groundation Grenada.

Speaking on the topic: “The Grenada Revolution, Foreign Policy and Development of Small Island States in the Present International Environment,” Skerrit said that the most important lesson for the contemporary leaders of the region, ”is the imperative and the special responsibility to speak out clearly and loudly against any infringement of the fundamental freedoms that our fore-parents so desperately fought for”.

The Grenada revolution was sparked by the 1979 overthrow of the Eric Gairy administration by the leftwing New jewel Movement (NJM).

Bishop and several of his ministers were later killed and Coard and 18 others were sentenced to jail, but were released a few years ago.

Prime Minister Skerrit said it should be noted that “no decisive interventions” were made by the Caribbean or American leadership when then Prime Minister Gairy brought “Grenada into the orbit of fascism” with links to former Chilean leader Augusto Pinochet and South Korea’s strongman, Park Chung-Hee.

He said the regional and American governments were also quiet when Gairy used his Mongoose Gang and ‘his progressive subversion of the democratic process”.

In analyzing the lessons learnt with respect to the foreign policy and the development options pursued by the Grenada revolution, Prime Minister Skerrit said the fundamental principles that guided such a policy were one of non alignment and diversification of relations to extend the range of friendships while providing options in pursuit of national self-interest.

“Grenada did not believe in putting all its eggs in one basket, especially a basket that was lined with dictated conditionalities that ran counter to its philosophy of what must be done to empower and enfranchise its people. “.

Skerrit said that this fundamental principle has guided the Caribbean Community (CARICOM) relations with Cuba and Venezuela and indeed the region’s response to the USA intervention in both Iraq and Libya.

“In addition, we must maintain unflinching opposition to apartheid, colonialism and racism wherever and however they are practiced. These values flow logically from the historical journey of the majority of our people over the last 400 years in the Caribbean.”

Prime Minister Skerrit said that the Caribbean must cease the rhetoric as to how it can mobilize its citizens to be an effective lobby in the Diaspora to advance the region’s approach to development.

“We must simply get on with it! This would be even more meaningful if we co-ordinate our efforts as a region to sensitize and mobilize our people whether in London, New York or Toronto.

“We should note that besides extending its relations with traditional western powers such as the United Kingdom, the European Union and France and seeking to extend relations with the United States, Grenada built up close relations with a wide cluster of non-traditional countries: the Nordic countries, a diverse array of (democratic) Latin American countries, (Sandinista) Nicaragua, the Soviet Union, Vietnam, East Germany, DPR Korea, Mozambique, Libya and Syria.”.

Prime Minister Skerrit said that Grenada’s foreign policy under Bishop is best summed up by a speech the former prime minister gave to Washington’s ultimatum that “Grenada is a sovereign and independent country, although a tiny speck on the world map, and we expect all countries to strictly respect our independence just as we will respect theirs”.

Bishop also went on to state that “no country has the right to tell us what to do or how to run our country or who to be friendly with. We certainly would not attempt to tell any other country what to do. We are not in anybody’s backyard, and we are definitely not for sale.”

Skerrit told his audience that he has drawn heavily on the Bishop philosophy for guiding his own island through one of the most “devastating recessions in recent history”.

He said when the Dominica Labour Party (DLP), which he leads, came to power in 2000, it found a foreign policy that was determined by traditional colonial customs.

“The 44 countries with which it had established diplomatic relations since Independence were predominantly on the American side of the Cold War divide. As the Cold War thawed out, my administration decided to review the country’s foreign policy. We rationally decided that it was in the best interest of Dominica to shift from supporting Taiwan to adopting the “One China Policy”. “

He said this change of policy began to bear fruit immediately as support, in the form of grants and concessionary loans, was received from the People’s Republic of China and used for infrastructural development on the island.

He said similar close relationships were established with Venezuela that led to the signing of the PetroCaribe Agreement and the joining of the Bolivarian Alliance for Peoples of our America (ALBA) in 2008.

Skerrit said that as a result of the new foreign policy thrust, by 2014 Dominica had established “meaningful and productive relationships” with 94 states.

“In the process it received international recognition for its efforts to eradicate poverty and achieve sustainable development without destroying its natural environment and its communities. In this way Dominica was able to attract more grants, concessionary loans and technical aid from friendly countries,” he said, noting that “today, all countries, particularly small island development states, face the challenges of globalization”.

Skerrit said that in the final analysis, globalization poses both opportunities and threats.

“I believe that the current recession has taught many of us the virtue of uniting; the imperative of diversifying our economies by encouraging entrepreneurship and putting our God-given resources to optimum use; and the need to remain steadfast in our mission to generate wealth in such a way that all of our people receive a fair share.

“We have to first create the wealth and then distribute it more equitably among our citizens so that their lot does not mirror that of their grandparents and great-grandparents.

“Let us be frank. Our small size has not traditionally given us a competitive advantage. However, we now have the opportunity to leverage the technological advances in transport and communication along with the political structures of the Economic Union of the OECS and the Single Market and Economy of CARICOM to better deliver the promises of development to ALL our people.

“In a very real sense, the establishment of these two regional entities as communities of sovereign states is the ultimate testimony of how Foreign Policy may be a clear expression of faith in what can be achieved while maintaining our independence as nation states in this region,” Skerrit added.