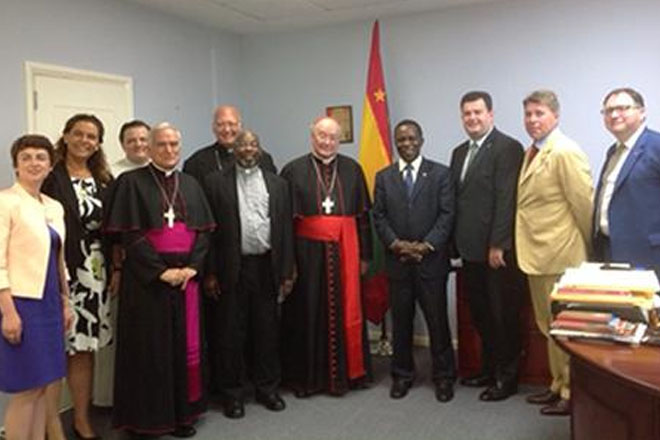 Grenada to benefit from US$1.5 million charitable donation by the Vatican

St George’s, Grenada — Grenada will be the beneficiary of a £1 million (US$1.587 million) charitable aid package from the Vatican.

This was announced by Cardinal Renato Raffaele Martino, Grand Prior of the Constantinian Order and protodeacon of the Holy Roman Church, and inter-faith campaigner Sir Anthony Bailey, during a courtesy visit to Prime Minister Dr Keith Mitchell last Wednesday morning.

In receiving the support, prime minister said that he “was moved by their generosity, especially since the projects will affect many of the most vulnerable among us.”

The cardinal and team thanked Mitchell for his visit to the Vatican last year, and expressed how beneficial the visit has been to both sides in forging a relationship and helping to strengthen the Vatican’s charitable presence in the region.

They also urged the prime minister to move speedily and join most of his regional neighbours in appointing a non-resident ambassador to the Holy See, which will help in further strengthening the relationship between the region and the Holy See, given their new thrust to help in the development of the Caribbean.

According to Bailey, the non-resident ambassador will help to also move projects along, and secure funding for other projects that they are already thinking about with respect to Grenada and the rest of the region.

Upon learning that the Vatican has already established diplomatic relations with a number of other countries in the region, Grenada’s prime minister welcomed the request and offered additional reasons why this will be vital in moving forward. Among those, the prime minister said, is the Vatican’s increasingly diplomatic role in helping to heal formerly adverse relationships such as that between Cuba and the United States.

Further, the appointment of non-resident ambassadors will be “positive for the church in showing that they are helping people across the board — not just Catholics — in line with the initiatives of the Pope.”

According to the prime minister, “The Vatican and their charitable engagements are sending the right message, which will ultimately help in the retention and growth of the membership of the Catholic Church.”

The delegation from the Holy See also announced that Rome has already taken the decision to create a delegation, headed by one of the visiting archbishops, specifically for Caribbean affairs.

That delegation will see to it that the Vatican engages more catholic agencies and fund more charitable projects in the region. As such, Grenada’s appointment of a non-resident ambassador will help to move this process along smoother and more efficiently to the benefit of Grenada.

The official delegation also introduced two vice-delegates with responsibility for Grenada who will be here to monitor the implementation of the projects that they are funding.