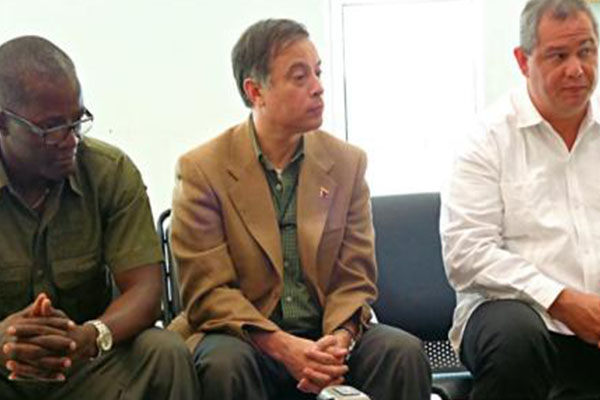 CASTRIES, St Lucia (GIS) — Officials representing Petroleum of Venezuela (PDVSA) have provided positive feedback on a recent visit to Saint Lucia, in preparation for the initial stages of shipping fuel under the island’s PetroCaribe agreement.

The main objective of the trip was to gather information on the logistics and commercial aspects of the agreement for the initial fuel shipment.

Saint Lucia’s ambassador to PetroCaribe and ALBA, Hippolyte Eustace Vitalis, said since the initial agreement Saint Lucia and Venezuela have been laying the groundwork for the fuel initiative.

“They are here so that they can get more information and assist in establishing the entity that will be responsible for the operating aspect, so that upon their return they can prepare a roadmap for the initial stages of the pumping of the fuel,” said the ambassador.

The experts met with local commercial stakeholders, as well as government officials, describing the meetings as “productive and fruitful”.

“We met with people from LUCELEC, finance people, the Bureau of Standards and we talked about technical aspects that are needed in order to accomplish contracts, and administrative steps to initiate the product supply,” said PDV Caribe sales and marketing manager, Daniel Comoretto.

Additionally, the officials met with Buckeye, formerly Hess Oil, and indicated their discourse with the operators of the storage facility was positive.

Comoretto added that under the initial PetroCaribe agreement between Saint Lucia and Venezuela, the island will receive supplies of diesel and gasoline.

In response to public concerns about the agreement, Vitalis said Saint Lucians and especially petroleum dealers can rest easy.

“The intention is not to take 100 percent of the market. That is very important because a lot of the discussions that have gone around gives the impression that the government intends to establish private or government fuel stations,” said Vitalis. “That is not the intention. The intention is to work with the present players.”

Discussions have been held with SOL and, according to the ambassador, the feedback was very encouraging given the company’s experience in neighbouring islands.

The initial agreement will result in Saint Lucia receiving 1000 barrels of diesel and 500 barrels of gasoline per day. Vitalis said in the future the government will look to expand the range of products under the agreement.

The ambassador affirmed that the intention is for PDVSA to occupy only a small segment of the local market. Additionally, there are significant benefits the country can accrue from this initiative through the establishment of the fund that existing and new private businesses can utilize to generate economic activity at much lower interest rates.

Government will also be able to use part of the fund to finance social projects within the island’s communities.

Vitalis indicated that Saint Lucia’s delay in signing on to the agreement, afforded them an opportunity to learn from the experiences of other signatories and adjust the country’s participation for greater national benefit.