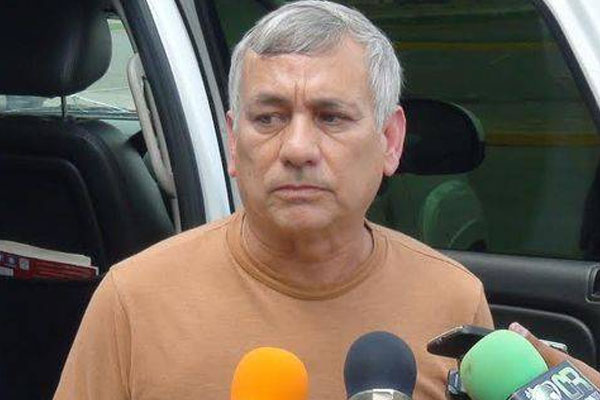 Monterrey, Mexico (AFP) — Gunmen killed a Mexican general sent by the government to tame violence in a northern state plagued by drug cartel crimes along the US border, authorities said Monday.

General Ricardo Cesar Nino Villarreal and his wife were shot dead as they drove Saturday in Vallecillo, in the northern state of Nuevo Leon.

But their two-door car and the bodies were found only Sunday by people who were driving on the road linking the cities of Monterrey and Nuevo Laredo, said the security task force of the neighboring state of Tamaulipas.

More than 100 high-calibre bullet casings were found at the scene of the shooting, officials said.

Nino Villarreal was one of four military officers who were deployed by the federal government in May to stem a surge of violence in Tamaulipas.

The general was in charge of a northern zone that includes Nuevo Laredo, a city bordering Texas which has been the scene of turf wars between cartels fighting over control of the lucrative drug trafficking route.

“The government of Tamaulipas condemns and deeply laments the death of General Ricardo Cesar Nino Villarreal and his wife,” the state’s security coordination group said in a statement.

Nuevo Leon’s chief prosecutor, Adrian de la Garza, said earlier that authorities were checking whether the general was one of the victims. Tamaulipas authorities said Nuevo Leon prosecutors had confirmed his identity.

De la Garza said the general usually traveled in an armored vehicle with a security detail, but the victim was unarmed and in a civilian car.

Nino Villareal survived a previous attack on October 9 when unidentified gunmen shot at his armored vehicle in Linares, also in Nuevo Leon state.

Before his appointment in Tamaulipas, Nino Villareal was head of police in the Nuevo Leon town of Cadereyta.

The military took full control of security in Tamaulipas in May after scores of people died in a series of gunfights between warring cartels as well as clashes between gangs and security forces.

The state has been plagued by turf wars between the Zetas and Gulf drug cartels for years.

Both gangs have been weakened by the arrests or killings of top leaders.

The most recent violence has partly been blamed on infighting within the Gulf cartel.

Violence continues to torment Tamaulipas residents despite the security overhaul.

Three American siblings, all in their 20s, and a Mexican man were found dead last week, two weeks after they were abducted in the town of Control.

Prosecutors have questioned nine members of a special police unit over allegations that they had kidnapped the four victims.

The officers were part of a tactical force known as the Hercules Group, which was formed by the mayor of the city of Matamoros, Leticia Salazar.

In October, a doctor who used Twitter to report violence in Tamaulipas was kidnapped by unknown assailants in the border city of Reynosa.

Authorities said they were investigating whether Maria del Rosario Fuentes was killed after disturbing pictures of her were posted on her account before it was taken down.

More than 80,000 people have been killed and 22,000 have gone missing since Mexico’s government deployed troops to crack down on drug cartels in 2006.