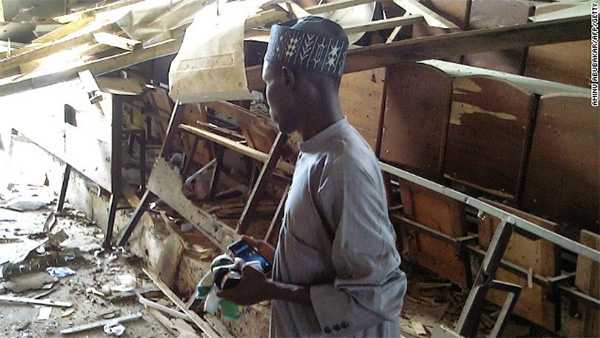 (CNN) — Two gunmen set off explosives at a Nigerian college, then started shooting — killing at least 13 people on another day of violence in the African nation, and yet another targeting students.

Kano state police commissioner Adelere Shinaboa said the attackers got on the Federal College of Education campus in Kano after opening fire at a checkpoint. About 3:30 p.m. (10:30 a.m. ET), they forced their way into a lecture hall, set off explosives and “began sporadic shooting,” according to police.

The attack ended when responding police killed both assailants. Authorities recovered AK-47 rifles and unexploded bombs at the scene.

Thirteen others were also dead by then, police said, while 34 wounded were taken to a local hospital for treatment.

While it was not immediately clear who was responsible, the northern city of Kano and the surrounding area has seen more than its fair share of bloodshed in recent years at the hands of Boko Haram.

The Islamist extremist group is pushing to spread and enforce its strict interpretation of Sharia law over the territory it controls — and showing no mercy on those who don’t subscribe to its beliefs and get in its way.

Schools have been a common target, befitting a group whose name Boko Haram translates in the local Hausa language as “Western education is forbidden.” The most well-known incident occurred in April, when militants abducted more than 230 schoolgirls from a school in the rural northeastern town of Chibok.

On June 23, at least eight people were killed and 12 others wounded when a bomb exploded at a medical school in Kano, Nigeria’s second-largest city.

At least three people died later in the summer when a suspected suicide bomber targeted students at Kano State Polytechnic.

After Wednesday’s attack, President Goodluck Jonathan’s office released a statement offering his sympathy for the loved ones of those killed “during the attack by terrorists.”

“President Jonathan reassures the people of Kano and all Nigerians that the federal government continues to do all within its powers to further enhance the ability of police, armed forces and other security agencies to prosecute the war against terrorism to a successful conclusion and provide greater security of lives and property across the country,” the statement concluded.

Boko Haram was born 12 years ago, led by a charismatic cleric named Mohammed Yusuf who was pushing for a pure Islamic state. Yusuf was killed by police in 2009, with Abubakar Shekau taking over the group and taking it in an even bloodier direction.

Much of this violence has been in Yobe, Kano, Bauchi, Borno and Kaduna states in the country’s north and east, though the capital of Abuja has also been hit.

Boko Haram fighters have not only battled Nigerian troops for years, they’ve killed civilians in everything from bombings on crowded markets to attacks on otherwise peaceful villages.

Few have been spared in its brutal campaign. The group has been blamed for killing Christians, government officials and Muslims, as well as the kidnapping of women and children. To give a sense of Boko Haram’s mentality, after the mass abduction of the Chibok schoolgirls, a man claiming to be Shekau promised in a video that he’d sell the girls “in the market.”

Nigeria’s military has fought back, and garnered criticism in the process. Rights groups, including Amnesty International, accuse government troops of committing war crimes and other abuses in their efforts to crack down on Boko Haram.