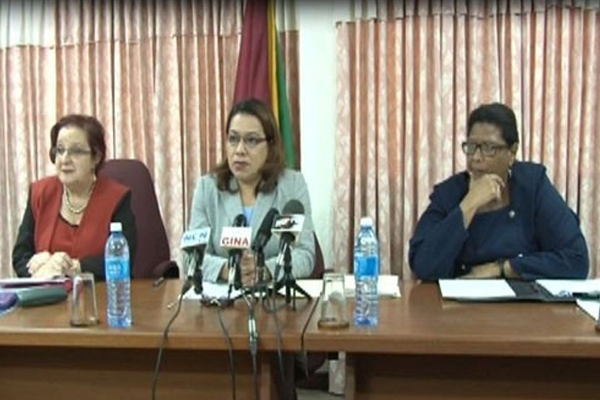 Georgetown, Guyana (GINA) — Minister of Foreign Affairs Carolyn Rodrigues-Birkett on Wednesday reported that Guyana has accepted 75 of the 143 recommendations made at the United Nations (UN) Universal Periodic Review meeting, which was held in Geneva, Switzerland, on January 27.

During a press conference at the ministry of foreign affairs, the minister, joined by presidential adviser Gail Teixeira, informed the media of the outcome of the meeting, which saw the second review of the human rights records of all 193-member states of the United Nations. The forum was held in Geneva, Switzerland, and was attended by Rodrigues-Birkett.

This was Guyana’s second review since the first was done in 2010, and as such the 2015 reports dealt with measures taken since the last review.

In 2010, most of the recommendations focused on abolishing corporal punishment from schools, abolishing the death penalty and decriminalising adult same sex relations, and removing those sections in the laws that discriminate against lesbians, gays, bisexual, and transgender persons.

According to Rodrigues-Birkett, Guyana reported to the working group that a Parliamentary Special Select Committee has been established, to address those issues, but the work of the committee has not been completed.

The group has also been informed that it is Guyana’s intention to take back these matters to the parliament following the general election in May.

“We also reported too that while the death penalty has been retained, several legislative measures have been taken including certain sentenced now being commuted to life imprisonment and imprisonment with the possibility for parole,” she said.

Further, at this year’s event 54 countries spoke during the session and together they made 143 recommendations. As all states, Guyana had the option of responding to the recommendations, to some or all, not to respond to any, or provide a report at a later date but no later than the session of the Human Right Council in June.

The minister of foreign affairs reported that of the 143 recommendations, Guyana accepted 75 of those, along with an additional four, on the basis that those recommendations were already in implementation stage.

Further, she explained that the Guyana government has committed to consider another 64 recommendations, but will be reporting to the Human Rights Council, which will be held in June of this year.

The 75 recommendations that Guyana has accepted include:

• Adopting measures that will promote and prevent discrimination against women

• Strengthening the presence of women in various institutions and political life

Those recommendations that were accepted for consideration include:

• Abolishing the death penalty and or establishing a formal moratorium

• Establishment of a Human Rights Institution in accordance with the Paris Principles and one that would be accredited by the Human Rights Council.

• Increasing the capacity of the Police Complaints Authority

Meanwhile, Rodrigues-Birkett explained that the 64 recommendations that were accepted for consideration will be examined and a report to be submitted no later than the 29th session of the Human Rights Council to be held in June.

However, the minister pointed out that many of the recommendations have deep cultural and societal considerations and will require widespread consultations before reaching a conclusion that will find favour with the majority of persons in society.

More importantly, she said these recommendations will have to find favour with the majority of parliamentarians, since ultimately the parliament is where the laws will have to be amended.

Pointing to the fact that some of these recommendations have financial considerations and that the government has been increasing the budget to the social sector it was necessary to point this to the UPR group.

“We found it necessary to indicate to the UPR group and the member states present that we believe that the means of implementation for the sustainable development goals which are being finalised right now must be very clear to assist small states like Guyana,” she said.

Nonetheless, she stated that the improvement of the lives of citizens, their human rights and their overall wellbeing will continue to be the focus of the government of Guyana. She added that it is for this reason that Guyana has accepted the majority of the recommendations since they represent what the administration is doing, and will continue to do as the UPR process will therefore continue to be a very important aspect of the human rights mechanism to which Guyana subscribes fully.

The UPR was created through the UN General Assembly on March 15, 2006 by a resolution which established the Human Rights Council itself. It is a cooperative process which, by October 2011, has reviewed the human rights records of all 193 UN Member States. Currently, no other universal mechanism of this kind exists.

The UPR is one of the key elements of the Council which reminds states of their responsibility to fully respect and implement all human rights and fundamental freedoms.

The ultimate aim of this mechanism is to improve the human rights situation in all countries and address human rights violations wherever they occur.