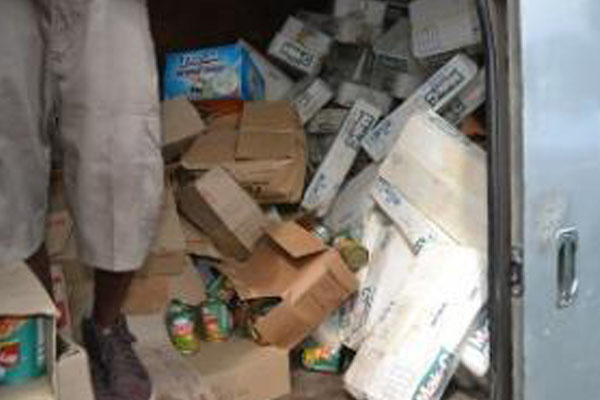 Georgetown, Guyana (CMC) — Health authorities have seized several expired food items and goods they say were being loaded onto a vehicle for sale to consumers in Guyana.

The Registrar at the Ministry of Health’s, Pharmacy & Poison Board, Khame Sharma, was among health and law enforcement authorities that scooped down on a warehouse in West Ruimveldt where the goods and were being loaded.

“The storage conditions of the goods were also deplorable and unhealthy, as rotting goods, such as potatoes, were seen among them, and the labels were torn and discoloured with mildew,” a government statement added.

“The marketing of such goods are hazardous to human health, and for this reason the ministry will continue to be on the lookout for them on the local market. Citizens are advised to report any suspicious and similar activities or storage conditions brought to their attention, as they pose a threat to them and their families,” it added.

Sharma said that the board has been receiving numerous complaints of these products, which are distributed countrywide.

The authorities say they are unable to trace the owner of the seized goods with the driver of the vehicle saying he was asked to transport them to Essequibo.

The Ministry of Health said it is urging distributors to check their products and verify that they are in line with the specifications of the Guyana Bureau of Standards.

“Distributors are reminded that the marketing of such products can result in legal consequences,” the government statement said, urging consumers to ensure that they receive a bill for all transactions, when purchasing goods.