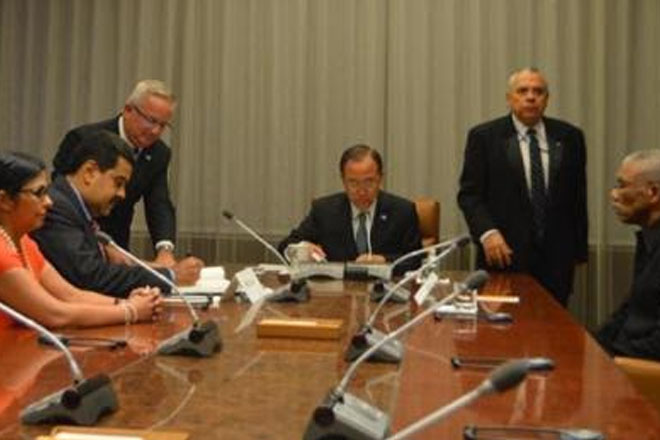 Guyana calls for a legal solution to border issue with Venezuela

Following the meeting, which was held on the sidelines of the ongoing United Nations General Assembly, Maduro agreed to allow a UN delegation to visit Caracas to conduct investigations.

Speaking to local journalists, Granger said he took the opportunity to lay out simple facts, none of which Maduro could deny.

“I pointed out that Venezuela in 1899 received 1,300 square kilometers of Guyanese territory and he could not deny that. All we said tonight was factual; about the territory, about the Venezuela aggression, the obstruction of Guyanese development,” Granger said.

He added that the Guyanese delegation also seized the opportunity to stress that there must be a juridical settlement.

According to Granger, Venezuela was unable to provide any evidence that the 1899 award was null and void. However, on the contrary, Granger maintained that Guyana’s position is that the controversy is essentially a legal one, which requires a legal solution.

The Guyana president added that, for the first time since the May 26th decree by Venezuela, which sought to annex maritime zones belonging to Guyana, the Venezuelan president has agreed to facilitate a UN delegation into Caracas to conduct investigations.

Already, Guyana has facilitated a similar team from the UN, as was promised at the CARICOM heads of government meeting, which was held last July in Barbados. Once these investigations are completed, Granger said he will be available to have further discussions with the UN secretary general.

As an outcome of the meeting, it was reported that Maduro has agreed to resolve the matter of ambassadors between the two states at the earliest possible time.

Granger said he was very grateful to Ban Ki-moon for facilitating the meeting, since he believes that the UN has a very significant role to play in the matter.

“We are convinced that under the Geneva agreement and under the charter of the United Nations the secretary general has specific responsibilities for dealing with this matter and it was logical that we should come back to him,” Granger said.

He said the meeting provided him and Maduro with the opportunity to explain their respective positions on the matter.