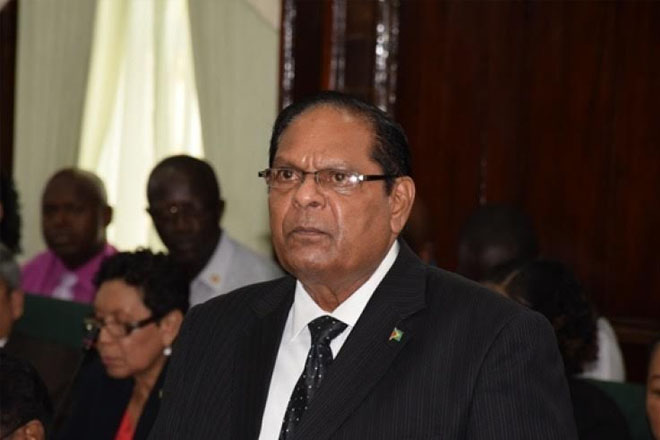 Georgetown, Guyana — Prime Minister Moses Nagamootoo has confirmed media reports that ministers and other top level government officials will be getting bigger pay checks, saying they need to be paid “respectable salaries” to reduce the risk of them getting involved in corruption.

However, he said no 100 per cent increase had been decided on, as some reports had indicated.

Speaking to journalists on Sunday, Nagamootoo sought to explain the reasons for the pending salary hikes.

“There has been a reduction in the number of ministries, and also it would be used as a method of preventing ministers from putting their hands in the cookie jars,” he said.

“They need to be paid respectable salaries, same as the police ranks and other persons, so as to avoid the temptation of stealing, accepting bribes and indulging in corrupt practices . . . . You see in the audits how many people have been helping themselves to vehicles and state funds, so I believe that ministers deserve to be paid.”

The prime minister also suggested that there were many high qualified persons who left lucrative jobs to serve the Guyanese people and questioned whether they were being paid enough.

On August 1, the Guyana Times reported that the David Granger-led government planned to announce salary increases that would see some senior government officials going home with more than twice their salaries.

It also quoted Finance Minister Winston Jordan as saying government would be fulfilling its promise to grant pay increases to public servants as well, although he did not say when that would happen.

In response to reports, the People’s Progressive Party (PPP) said it condemned this “act of excessive generosity” by A Partnership for Nation Unity and Alliance for Change (APNU+AFC) administration which it said had accused it of excessive spending while in power.

“The Granger administration is now planning to rub salt in the wounds of Guyanese, by ‘fixing up the boys and girls’ with big pay increases. This is same administration which had claimed there is no money in the treasury to continue the School Uniform Voucher Programme and to give public servants a promised 20 per cent pay increase,” it said in a statement.

“Clearly, the Granger administration is more concerned with living extravagant lifestyles and earning big bucks, while the population suffers,” the PPP added.