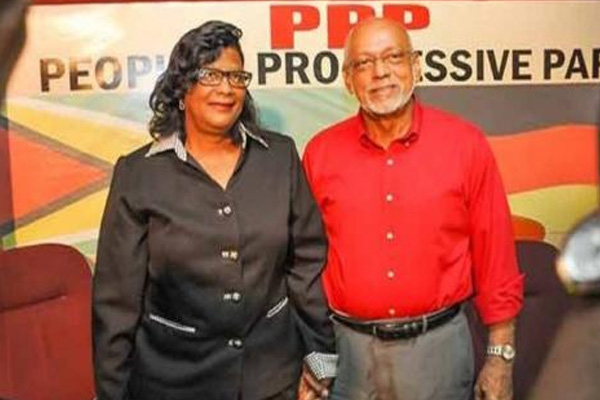 Georgetown, Guyana (GINA) — Guyana’s ruling People’s Progressive Party/Civic (PPP/C) has declared its leadership ticket, naming Elisabeth Harper as its prime ministerial candidate – the first woman to be nominated to the post – and the running mate for incumbent President Donald Ramotar.

Harper, the director-general of the ministry of foreign affairs, according to Ramotar, is a “patriot” who has served Guyana well in the past.

“I am proud to be running with Mrs Harper and I have every confidence that we will not only win the election, but we will have the majority in the National Assembly, which is so important for the development of Guyana,” Ramotar said during a news conference.

Harper was the only nomination made by the party’s executive committee to the PPP’s Central Committee, the party’s second highest decision-making body after its Congress, which concluded its deliberations on the matter only minutes before the announcement was made.

“There are many well-deserving individuals within and outside of our ranks who received our attention and consideration,” Ramotar said, although he did not specify who those persons were.

He added, “That we have this depth and competence and quality of leadership speaks not only to our support base, but to the wider Guyanese society, rich in commitment and competence to hold important offices in our land.”

The incumbent head of state hailed Harper as a woman whose service has been characterised by distinction and who will be an asset to the party.

“She has served our nation with distinction well, not a partisan, but a patriot, who, in her career as an outstanding diplomat, has dedicated her service to ensuring our great land remains united and prosperous… she will play an important role in the struggle to maintain our progress,” Ramotar said.

“Her experience, dynamism and loyalty to the betterment of our nation will complement the exceptional leadership and visionary policies that we have displayed over the years in government,” the president added.

Meanwhile, Harper, who declined to comment on her selection as the PPP/C’s prime ministerial candidate, was quoted by Ramotar as saying she was humbled by the invitation.

“I am humbled that such confidence has been reposed in me to be chosen… I have always put Guyana first, believing in its potential. My love for country has convinced me to accept this offer,” he quoted her as saying.

“The Central Committee unanimously endorsed the nomination presented by the Executive Committee and re-affirmed the tradition established in 1992, whereby the prime ministerial candidate for the PPP/C would be a member of Civic Society,” he said.

Rohee, like Ramotar, hailed Harper as an asset to the party and went a step further to stress the role of women in the political arena.

“I need not emphasise the intrinsic value of the instinct of women in general and in politics in particular, coupled with a high level of competency and honest endeavour to serve and how undoubtedly these and other attributes of Mrs Harper will be etched for time immemorial in the hearts and minds of thousands of voters come May 11,” he said.

The PPP general secretary added that Harper brings “sparkle” and a “burst of freshness” that undoubtedly (will) energise the party’s support base.

“Mrs Harper has for many years laboured in the ravines of international diplomacy in service to our country and people. She is a proven and tested servant of the people of Guyana. This consummate public servant is totally committed to placing at the disposal of a future PPP/C government all the invaluable skills and experience she has accumulated over the years,” he said.

“As the prime minister of the PPP/C government, she will contribute immensely to continuing the exciting journey of building a ‘Strong, Stable and Secure Guyana’. Mrs Harper brings to the PPP/C a formidable grasp of current national and international issues which is so necessary for the governance of small states in today’s modern world,” he added.

He too expressed confidence in her and reiterated that she has “convincingly demonstrated” that she is a true patriot with the interest of Guyana at heart.

Harper, a career diplomat, is 57 years old, and has worked with the ministry of foreign affairs for decades.