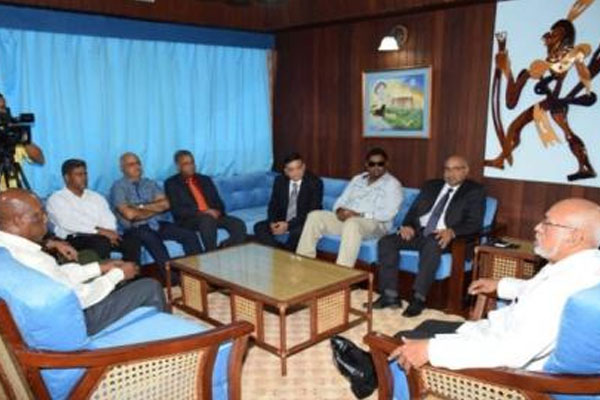 Georgetown, Guyana (GINA) — A public-private partnership is underway in Guyana that will see the creation of 400 to 500 jobs and will take the country a step further on the green pathway.

The Institute of Applied Science and Technology (IAST) has secured a solid investment partnership with Pinnacle Green Resources, an Asian company, for the execution of three projects, a total investment of approximately US $35M.

In exchange for providing technical and scientific support to Pinnacle, the IAST will receive five percent equity from the entire project.

The first project is the construction and operation of a facility that will produce 200 tons of wood-pellets per day, for export to Europe.

In the execution of this project, Pinnacle Green Resources (Guyana) Limited will begin cultivation of an energy plantation on 5,000 acres of land in the Akawini area in the Pomeroon, Region Two. This crop, commonly called the “jumbie bean” is of the plant Leucaena leucocephala and is a non-invasive species already found in Guyana.

Pinnacle has established a memorandum of understanding (MoU) with Go-Invest for the lease of the land. The price for truck delivery to private consumers in sacks is €333 per tonne, while the price for bulk delivery is slightly lower.

The second project involved the construction and operation of a facility to produce three tonnes per day of activated carbon from coconut shells, primarily to service the gold recovery industry in Guyana.

Head of the IAST, Dr Suresh Narine, explained that there is a growing demand for activated carbon both locally and internationally. Apart from the gold mining industry, it is also used in the beverage and pharmaceutical industries.

Activated carbon is a non-graphite form of carbon that could be produced from any carbonaceous material such as coal, lignite, wood, paddy husk, coir pith, coconut shell, etc. Narine explained that, as the coconut industry benefits from investments like these, it will no doubt lead to a growth in production.

The third project will see the construction and operation of an eight MW electricity generating facility using bio-mass. An ECLAC study has indicated that Guyana has the capacity to generate annually, 300 percent of its diesel demand equivalent in bio-mass; however, that potential is yet to be fully harnessed.

IAST and Pinnacle Green Resources will be moving to make the best use of Guyana’s forest and agricultural wastes in order to generate eight MW/hour of electricity using gasification technology. It is estimated that the venture can produce electricity for sale at US cents 19/kwh.

Speaking briefly to the media and the investors, President Donald Ramotar said that he has always been pushing for the IAST to move into more commercial-type and value-added activities.

“I am extremely happy that we are beginning to see this now. This project will not be putting any pressure on our forest…,” he said.

The president noted too that this project will be a major boost to residents on the Essequibo coast, which has till now, depended heavily on rice. He expressed the hope that this kind of value-added venture will be mirrored in other regions.

Pinnacle is a multi-national company from India and Singapore with presence in Taiwan, Hong Kong, and various parts of India. Its executive director, Manu Bansal had first approached Guyana’s honorary consul in Miami, Ramzan Roshanali.

Minister of tourism, industry and commerce (ag), Irfaan Ali, was the person who suggested that Pinnacle partner with the IAST since the latter has already done considerable work in this area. No local funding will be plugged into this project nor is Pinnacle being offered any special concessions. The government only paved the way for the lease of the 5,000 acres of land.

Narine said that this is a clear example of science and technology being used to generate commercialisation, wealth creation, addressing environmental issues, utilising natural resources and ensuring that a value is placed on the provision of technology.

The activated carbon facility, which is the first project that will be rolled out, is expected to become operational in eight months, the power generation facility in 24 months, and the biomass pellet plant in 18 months.