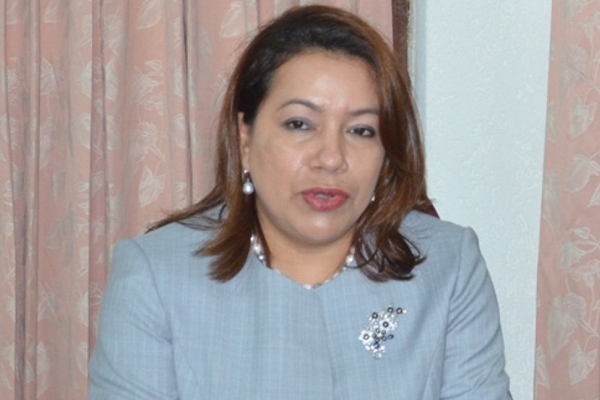 Georgetown, Guyana (GINA) — Minister of Foreign Affairs Carolyn Rodrigues-Birkett said that Guyana is looking at non-traditional partners, even while consolidating international and foreign policy relationships with the traditional ones.

On Friday, the minister explained that Guyana was forging ahead, working with countries such as Turkey, recalling the CARICOM/Turkey meeting last year. In a more direct manner at the bi-lateral level, Guyana has had several visits from various teams from the Turkish government; these are already bearing fruit as some small projects have been approved by Turkey in some key areas such agriculture and health.

Rodrigues-Birkett also mentioned that association with Chile will unfold as Santiago will be establishing an embassy in Guyana by the end of this year. She stated that was because of “our outreach down south as well … we now have an embassy in Kuwait and so we are doing some work in that region as well … so yes we have been increasing our number of partners in the international community.”

The minister emphasised the importance of establishing relations with so many countries as almost natural, since “it is an interconnecting world … it’s becoming interconnected with the technology that we have today, and we also see that diversification of power as we have many emerging economies that are doing very well and certainly those countries are looking for new partners…”

However, the minister cautioned “there will be times when we will not share the same position and there will be other times when we converge with respect to our positions … so it’s important for us to have relations with all the countries in the world.”

Rodrigues-Birkett highlighted that China is one of Guyana’s consistent partners. She noted that Guyana was one of the first countries in the English-speaking Caribbean to establish diplomatic relations with China, and that “they hold that fact very dearly and we also have been working very closely with China in good times and in bad times.”

She noted that China is the second largest economy in the world, with the largest foreign reserves, a major force with which to reckon. The minister also said that this powerhouse and close ally of Guyana has been reaching out to the Caribbean and the Latin American countries, and so the China/CELAC (The Community of Latin American and Caribbean States) must be applauded.

She pointed out that the first China/CELAC forum produced what is deemed a ‘cooperation plan’ that included some $35 billion that can come to the Latin America and Caribbean region. Of that, $5 billion is for cooperation; $10 billion for concessionary financing; and another $20 billion for infrastructure projects.

This kind of union she suggested is “quite a major achievement … of course the implementation now is what will be important and so small countries like Guyana and the rest of the Caribbean … we have to be ready to put forward our projects under that initiative.”

Continuing on the theme of integration, Rodrigues-Birkett referred to the recent visit to Guyana by the UNASUR (Union of South American Nations) secretary general, former president of Columbia, Dr Ernesto Samper.

He has been visiting all of the countries in UNASUR to discuss matters concerning the organisation, but the minister highlighted Guyana’s priorities. She said that a number of issues have been outlined, including inter-connectiveness of South America.

“I’m speaking about physical interconnection and already he has identified seven projects within the UNASUR mechanism, two of them include Guyana specifically, which would be the linking of Guyana, Brazil, Suriname, and then among Venezuela, Guyana and Suriname,” Rodrigues-Birkett noted.

This, she said, leads directly to the Corentyne Bridge, involving Guyana and Suriname. She added that, due to the “amount of money China has earmarked with cooperation from CELAC, Suriname has taken advantage of that as well.” There has been a submission for the Corentyne Bridge, which would benefit the two countries.

Guyana is member of UNASUR’s twelve South American countries, and has been consistently working to strengthen relations within the organisation’s framework, as well as bilaterally with the countries in UNASUR. This is why Guyana welcomed an Argentine embassy in Georgetown. It was also pointed out that Guyana’s position between the Caribbean and South America is very strategic. So, for the minister, “it is appropriate that we have the CARICOM Secretariat here in Guyana … so that is an added advantage.”

Chile is one of the countries in South America poised to achieve Developed Country status very soon, because of what they have been able to achieve, she said.

“…and so we certainly have a lot to learn from Chile. We are also working with Chile in the CARICOM context,” she noted.

The minster clarified that comments about and concerns of neglect of partnerships with long term partners are totally unfounded. She said that the United States remains Guyana’s largest trading partner in the world and so it is very important for that relationship to be preserved and strengthened. Also she highlighted that Guyana has the largest Diaspora population in the US as well, “so we have worked very hard to maintain our relationship, we are also working closely together on security matters, and in fact I would think that our security portfolio, in terms of projects, is the largest one within the US Caribbean Basin Security Initiative.”

The minister added that Guyana is also working with the US on a number of other initiatives, such as the issue of trafficking in persons, and even though “we do not always agree on some of the pronouncements, we are working very closely on that matter with the United States.”