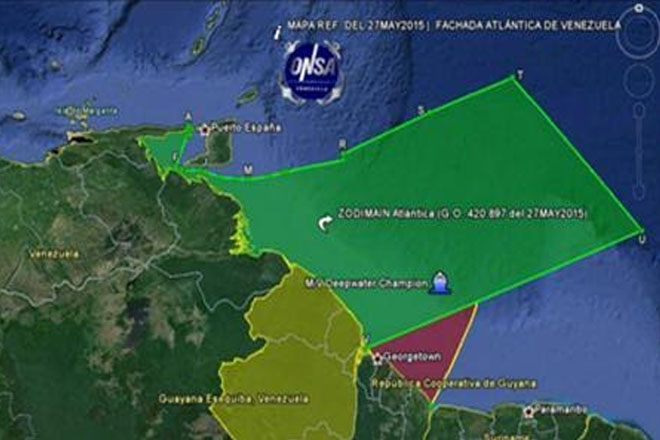 Georgetown, Guyana — Guyana’s new foreign minister, Carl Greenidge, in an address during the opening of Parliament last week, said that his country will seek UN assistance in resolving once and for all the territorial dispute with Venezuela that was escalated on May 27 by a presidential decree # 1787 that virtually “annexed” all of Guyana’s territorial waters and which authorized the Venezuelan navy to police the area.

Greenidge denounced Venezuela’s President Nicolas Maduro’s decree as a “flagrant violation of international law” and rejected “this illegality which seeks to undermine our efforts at development through the exploitation of our natural resources offshore”.

According to Greenidge, Guyana will internationalize the issue at all forums and has brought it to the attention to the United Nations Secretary General Ban Ki-moon.

In recent years, Venezuela has refused to accept a 1899 international arbitration award that settled the border dispute between the two countries, but with the discovery of significant oil deposits off the coast of Guyana last month by Exxon/Mobil, Maduro issued his own map to include that deposit off the coast of Guyana as part of Venezuela and accused “imperialists – Exxon/Mobil” of trying to foment tension between Guyana and Venezuela, and he demanded that Guyana halt the offshore exploration by US companies.

However, Greenidge in a warning to Maduro, said, “Guyana wishes to make it pellucid that Decree No. 1787 cannot be applicable to any part of Guyana’s territory and any attempt by the Bolivarian Republic of Venezuela to apply that instrument in an extra-territorial manner will be vigorously resisted by the Cooperative Republic of Guyana. In light of this Guyana will spare no effort in bringing to the attention of the international community this aggressive and illegal act by Venezuela.”

“It is international law that must reign supreme and not the ambitions of a larger state, which wishes to trample upon the rights of a smaller country in order to obstruct the sovereign right of Guyana to develop its natural resources,” Greenidge said.

Strangely, Maduro accused Guyana of overreacting and called for bilateral talks. On Friday, Caracas sent an envoy to Paramaribo seeking the help of Suriname to mediate between Guyana and Venezuela. The foreign minister of Suriname, Winston Lackin, said that his country is looking at the request and that his government will deliberate on the issue soon.

Interestingly, Maduro’s new map also expands into Suriname’s territorial waters but there has been no reaction from Paramaribo.

Furthermore, Suriname may not considered be a fair mediator by Georgetown, since it too has an outstanding border dispute with Guyana.

Guyana’s foreign minister confirmed on Saturday that there are ongoing bilateral discussions with Venezuela and an invitation from UNASUR to mediate the conflict was offered to his government. However, Greenidge made it clear that Guyana will not fall for Maduro’s manipulations of “taking advantage of whatever avenue it thinks can serve it well.” Thus, it is clear that Guyana has little faith in UNASUR to represent its interest.

Greenidge in his speech to Parliament also accused Venezuela of “economic aggression”. He summarized his country’s efforts to development the hydro and mineral resources of the region. However, for the past 50 years Venezuela has worked to hinder Guyana’s development of the Essequibo region by bullying countries and companies to which Guyana has granted concessions to develop the region.

Meanwhile, the previous government in office and the current government of Guyana have both complained the United Nations Good Offices Process, a mechanism set up to help resolve the decades-old claim Venezuela has made on the Essequibo, which suits Caracas because there has been “no movement to address the problem for more than 20 years,” according to former foreign affairs minister of Guyana, Carolyn Rodrigues- Birkett.

Rodrigues-Birkett told the Guyana Times in May, “We are, therefore, looking at the other options under the Geneva Agreement,” suggesting that “the other side (Venezuela) is comfortable with the good offices process because it suits their purpose – no movement.”

The good offices and mediation are roles taken up by the UN secretary-general in the prevention and the peaceful settlement of disputes, as enshrined in the UN Charter. These roles can be set in motion at the secretary-general’s own initiative, in response to a request from one or more of the parties to a dispute, or as a result of a request from the Security Council or the General Assembly.

“The other options – either of them – will have to be exercised by the UN secretary general. Indeed prior to Professor Girvan’s death, he was given just a six-month extension which is a sign that the UN was also weary of no solution,” Rodrigues-Birkett explained.

Guyana will now seek the UN Secretary General’s office in finding a mechanism that is already in place to bring an end to the dispute. Georgetown is adamant that it wants a final solution to put an end to Venezuela’s aggression.

Greenidge on Saturday made it clear that, while Guyana will work with all, it will go through the route of the UN to end the conflict. He said, “We will work on all the fora, UNASUR, OAS, Commonwealth and so forth. Right now the UN secretary general has a responsibility and we are going to call on him to exercise that responsibility because the other options have been exhausted, and therefore in order to avoid further damage to Guyana we will call upon him to carry out his duties”.