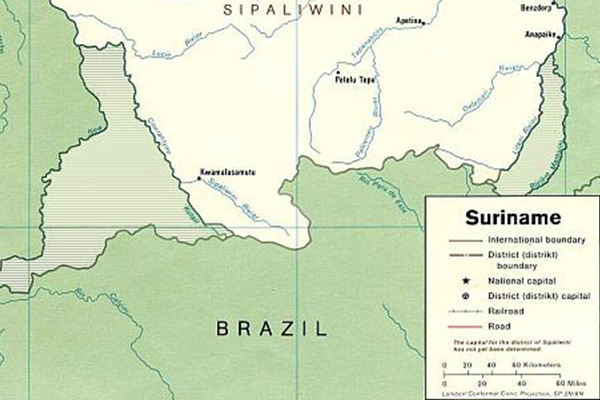 Paramaribo, Suriname — There has been no official word yet from the Suriname government in response to the revelation that Guyana has granted permission for a geological and geographical survey (PGGS) that includes a clause guaranting a Brazilian company, Muri Ventures, up to 18 prospecting licences to survey more than two million hectares of land for rare earth elements in a disputed area claimed by both Guyana and Suriname.

This development is being widely covered by the media in Suriname and Guyana and nationalistic sentiment is running high in both countries over the disputed land, which in Suriname is known as Tigri and in Guyana as the New River Triangle.

In 2011, President Desi Bouterse of Suriname said, “Let’s be clear on this; the Tigri area is our land.”

But Bouterse added that the border dispute wouldn’t prevent his government’s push for closer political and economic cooperation with Guyana.

The government of Guyana has also been silent on the issue, and the minister of natural resources, Robert Persaud has been condemned by the independent press of Guyana for reportedly agreeing a secret deal with the Brazilian company. The media in Guyana also alleged that the director of Muri Ventures openly campaigned for the ruling PPP government in Guyana.

One newspaper editorial in Guyana attributed this to “the overwhelming lack of transparency in government business. On top of the PPP’s historic Marxist predilection to secrecy and control of information.”

The Guyana Stabroek News asserted that the Guyana government has been unwilling “to implement legislative and other measures which would place all government business in the open and eliminate any room for hidden deals and attendant shenanigans. As a result, the Jagdeo administration stonewalled on access to information legislation.”

Meanwhile, in Suriname, the opposition parties are demanding answers. They condemned this action by the Guyana government as a violation of national sovereignty.

“Timber is being robbed from Surinamese soil,” they asserted.

The Suriname opposition has sent parliament speaker Jenny Gerlings-Simons a letter calling for Bouterse to come to parliament immediately to explain what is happening in Tigri.

The opposition said that Guyana’s action is a “serious violation of our territorial integrity and undermining our national economic interests.”

“Very disturbing information has reached us about the granting of mining rights by Guyana to a third party on Surinamese territory,” the opposition continued.

Suriname’s minister of natural resources, Jim Hok, said that he would not tolerate these illegal acts by Guyana.