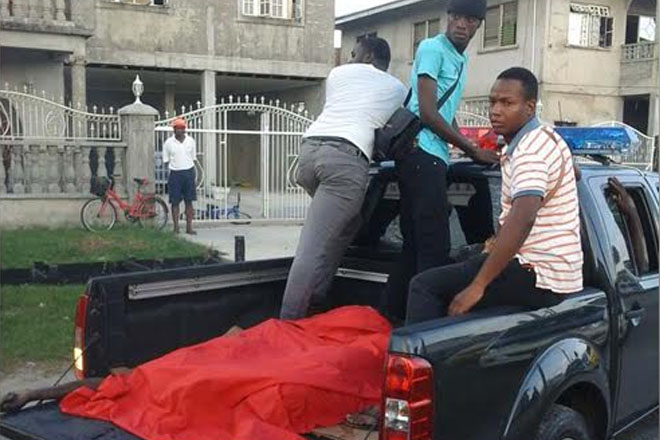 (Antigua Observer) Some residents of Greater Georgetown breathed a sigh of relief yesterday after two bandits were shot dead by the police in what is being described as a fierce shootout.

Pioneer Lane, South Ruimveldt Park, was likened to a warzone early yesterday morning with the sounds of rifle and small arms fire, which lasted for several minutes, and when the smoke cleared, two men lay dead.

The two men who have been identified as Edgar Blackman and Sherwin James, called ‘Tupac’, both 22 years old and of Tucville, were part of a gang that had attempted to commit a robbery on the home of Paul Morrison.

Police reports stated that about 04:00 hours yesterday, ranks responded to a report of a robbery in progress at the home of Arlene McLean, 47, of Pioneer Lane, South Ruimveldt Park, Georgetown.

The police said four men, three of whom were armed with firearms, had broken into the home and held up Arlene McLean and her sister, Ann Marie McLean, and took away a sum of cash and a cellular phone.

Upon arrival at the scene, according to the police, ranks came under fire from the perpetrators who were leaving the building at the time. The policemen returned fire.

During the armed confrontation, two of the men who were pursued by the police ran into a yard at Reliance Place, South Ruimveldt Park, and took cover behind a water tank from where they continued to engage the police.

An exchange of gunfire ensued and James and Blackman were shot by the police. They were later taken to the Georgetown Public Hospital Corporation where they were pronounced dead on arrival.

Initial reports on social media had stated that the men were hiding in a water tank when they were shot by the police.

But according to the police, “The two men did not hide themselves in the water tank; they took cover behind the water tank and continued to discharge rounds at the police. The other two men escaped.”

But residents of Reliance Place, South Ruimveldt Park detailed a different story of the ordeal which they say began at about 4:30hrs.

Kaieteur News learnt that after leaving the McLeans, the unsatisfied bandits attempted to gain access to the home of 53-year-old Paul Morrison at Lot 1615 Reliance Place, South Ruimveldt Park.

Speaking to media operatives after the police operation, Morrison recalled that he was awakened from a bad dream and heard noise on his roof and in his backyard.

“I peeped through my back window and saw three men; only one had a gun.”

He explained that upon seeing him, the man with the gun fired several shots into the air and ordered him to “open the door and come out”.

Morrison did not comply; instead, realizing that someone was already on his roof trying to gain entry to his house, he advised his children, who were by now awake also, to hide, while his eldest son switched off the house lights.

It is believed that the police were already alerted to the earlier robbery and were in the area. They reacted quickly to the sounds of the gunshots.

They quickly identified the yard it was coming from and they took up strategic positions to confront the bandits.

“When the first set of police arrived and cornered the three of dem, a tall one jump the fence and run away while the other two were confused to the point of staying in the yard, but the police couldn’t find them nowhere, even after a search.

But I tell dem that the men got to be in here somewhere,” Morrison told the media.

While continuing their search, one of the ranks noticed that the cover of a water tank was out of place. “Police observe the tank cover off…. and after they investigate and realize that somebody in the tank, they tell me to go back inside. I can’t tell you wha happen after then,” Morrison stated.

But no sooner had he gone back indoors other police ranks arrived then more gunshots erupted.

Those shots were actually the police releasing a volley of more than 60 rounds in the direction of the water tank. When the smoke cleared two riddled lifeless bodies were seen.

Morrison believes the men who entered his yard via his back fence were linked to a land dispute matter, and that their prime objective was to terrorize him and his family so that he would give up ownership of a property which he owns in Kitty, Georgetown.

“Immediately I recognized one of the dead men who had traced me on a CG Bike from my land in Kitty last Wednesday, then it all made sense.

It can’t be that it was a mere coincidence that the same man who followed me last Wednesday from Kitty to my corner, end up dead in my yard.”

By now a large crowd had gathered in the area.

Those who lived close by took advantage of their good fortune to observe the police operation from through slightly opened windows.

As the bodies were being whisked away from the scene by the police, loud shouts and cheers erupted. Persons openly congratulated the police on a job well done.

One woman called ‘Buckie’ looked directly at the bodies and declared, “Good riddance to these menace to society because dem don’t want to go look wuk.”