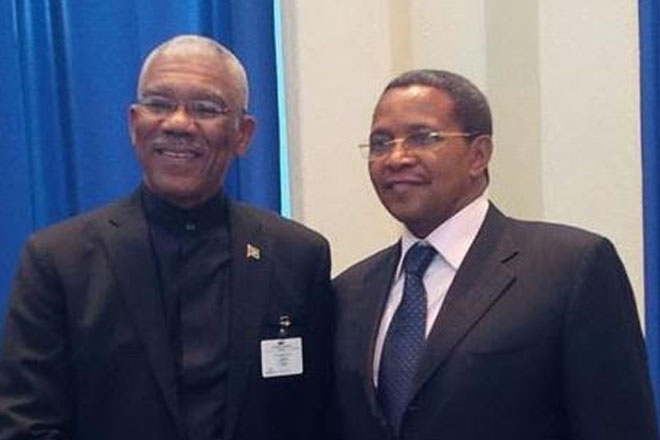 New York, USA — On the sidelines of the 70th United Nations General Assembly in New York, Guyana’s new president, David Granger, is holding a number of bilateral talks with other heads of states, especially from Africa. On Friday, Granger met with Tanzania’s President Jakaya Kikwete. On Saturday, he held bilateral talks with the vice president of Angola, Manuel Vicente, and on Sunday he was due to meet Kenya’s President Uhuru Kenyatta, in an effort to renew ties with traditional African allies.

Emphasis on African ties comes at a time when Guyana is seeking international backing against Venezuela, which has sent its army and navy along its border with Guyana. This latest Venezuelan “aggression”, according to Guyana, stems from the recent discovery of oil and gas off its coast. After more than a century, when an international arbitration tribunal settled the Guyana/Venezuela boundaries in 1899, Caracas since 1964 has renewed its claim to the mineral rich Essequibo region of Guyana.

Granger and the Tanzanian leader discussed on Friday fraternal ties and efforts to further expand them. Granger also brief Kikwete on the recent conflict between his country and Venezuela. The Tanzanian leader assured the Guyanese leader of Tanzania’s commitment to support Guyana with regard to the Venezuelan issue.

Guyana now wants stronger economic ties with Africa, especially that more and more countries there are becoming politically and economically stable; literacy has more than doubled, child mortality has dropped and, overall, the continent has seen dramatic economic growth.

Kenya, Uganda, Ethiopia, Rwanda, Zambia, Angola and Tanzania are some of the fastest growing economies in Africa.

Guyana is also exploring visa-free regime agreements with several African countries and is looking to strengthen its diplomatic presence in that continent.

Granger will have an opportunity to follow up on bilateral ties when he meets many Eastern and Southern African leaders at the Commonwealth Summit in Malta this November.

The new government of Guyana would like to see the return of the golden age of Guyanese diplomacy. Guyana hosted many heads of states and meetings when former president, Forbes Burnham, received leaders from Guinea, Liberia, Nigeria, Botswana, Tanzania, and Zambia. Georgetown was also host to four Arab embassies; none exist today.

Burnham was a close ally of Father of the United Republic of Tanzania, Mwalimu Julius Nyerere, who visited Guyana in 1974 and 1996.

Granger has also spent time in Africa. He is a historian and a prolific writer who has written much about Guyana-Africa ties. His coalition government has strong historical ties to the liberation of Africa and the Islamic world under Burnham.

Burnham paid a heavy price in the struggle to liberate Southern Africa when he stood up against Washington and allowed Cuban planes carrying soldiers to Angola to refuel in Guyana. Burnham visited Algeria, Botswana, Egypt, Guinea Conakry, Iraq, Nigeria, Somalia, Tanzania, Uganda, Zambia, among other African countries. Guyana also hosted pro-Palestinian meetings and is a founding member of the UN Committee on the Inalienable Rights of Palestinian People when it was established in 1975.