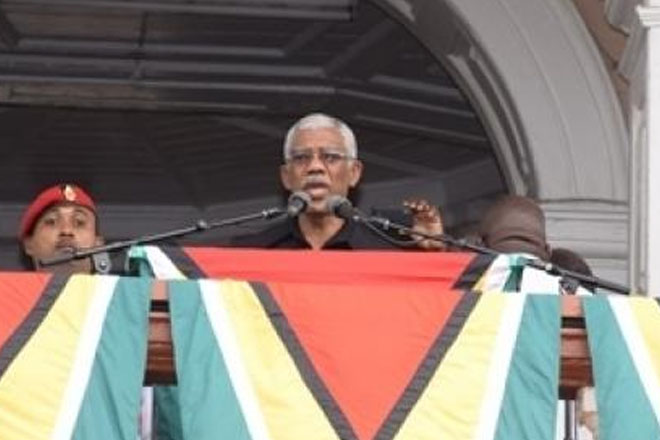 Georgetown, Guyana — Five days after national elections were held in Guyana, Brigadier David Granger of the APNU-AFC coalition was on Saturday sworn in as Guyana’s eighth president after the Guyana Election Commission (GECOM) officially declared him the winner against incumbent President Donald Ramotar of the Peoples Progressive Party (PPP).

However, Ramotar alleged that the election was “manipulated” in favour of the coalition, which won by a slim majority.

During the swearing in ceremony, Granger said, “I shall be a good president for all the people of Guyana,” and called for an “inclusionary democracy” as the best way to overcome Guyana’s “division,” in an effort to reassure all Guyanese and especially Indo-Guyanese who vote overwhelmingly for the PPP.

Unlike his two predecessors, Granger attended Queen’s College like former Presidents Forbes Burnham, Cheddi Jagan and Samuel Hinds and scholars like Walter Rodney and Rupert Roopnaraine. After leaving Queen’s College, where he was a member of the Queen’s College Cadet Corps, Granger joined the Guyana Defence Force (GDF) as an officer cadet in 1965, and was commissioned as a Second Lieutenant in 1966. He received his professional military training at the Army Command and Staff College in Nigeria; the Jungle Warfare Instruction Centre in Brazil; and the School of Infantry and the Mons Officer Cadet School, respectively, in the United Kingdom. Granger is also a historian who graduated Valedictorian from the University of Guyana.

Guyana’s new First Lady, Sandra Granger, holds two degrees in English and Brazilian Literature from the University of Pittsburg, Pennsylvania. Sandra Granger worked at the CARICOM Secretariat for 18 years and was a lecturer at the University of Guyana. Mrs Granger is of Amerindian and Chinese decent. Her mother hails from Guyana’s North West District and her father, Chan-A-Sue (deceased), came from Suriname. She is a strong advocate for women’s rights and national unity. One of the many first projects she would like to undertake as First Lady is that of child protection.

The APNU-AFC coalition that ousted the PPP, which had been in office for 23 years, is unique because a combined opposition of Africans, East Indians, Amerindians and Dougla (mixed race), came together for the first time in Guyana’s history. The PPP had apparently become complacent and was marred by accusations of rampant corruption, nepotism, political victimization, human rights abuses and delaying local elections for two decades. Guyana’s racial voting pattern has plagued the country’s development since its independence from Britain in 1966.

The APNU-AFC multi-ethnic alliance drew younger voters and minorities, who are looking beyond race and want change. Guyana’s ethnic voting pattern is slowly changing, but this recent election still demonstrates that a racial voting pattern is still strong in Guyana. However, significant numbers of Indo-Guyanese and Dougla gave the APNU-AFC coalition its victory, especially in urban areas.

Moses Nagamoottoo, who is a descendant of Indian immigrants from Tamil Nadu, India, is poised to become the next prime minister of Guyana. He is a lawyer by profession and the author of several books. Nagamootoo joined the PPP in 1964 and entered parliament in 1992. He broke ranks with the PPP in 2011.

When he left the PPP in 2011, he said, “I will not condone or be a part of any bullying, corruption and authoritarianism, more especially when these decaying practices emerged inside the organization to which I had dedicated all my life and to which I have given my finest efforts as activist, journalist and government minister.”

The administration of Granger and Nagamootoo will reflect Guyana’s diverse composition of Amerindians, Africans, Chinese, Indians and mixed-race.

In an all upper case message after the election result was announced, Ramotar wrote: “WE ARE BEING REMOVED FROM OFFICE, NOT THROUGH THE WILL OF OUR PEOPLE, BUT BY ELECTORAL MANIPULATIONS.”

Ironically, a day after the poll, the Ramotar administration praised the election as free and fair on the state-owned media they once controlled. However, after realizing that they had lost the election, they forced the Guyana Election Commission (GECOM) to delay the official announcement and called for total recount of the votes.