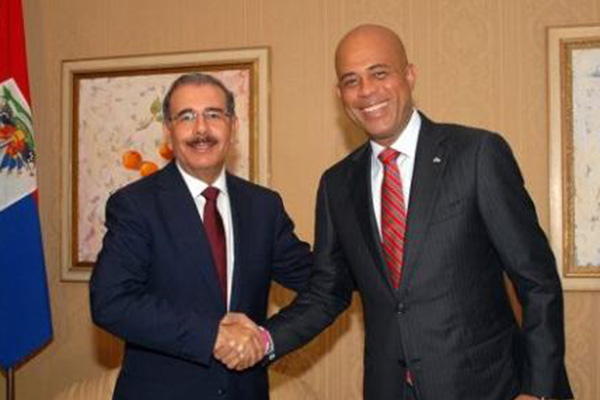 Caracas, Venezuela (HCNN) — The leaders of Haiti and the Dominican Republic agreed on Tuesday to set up a joint commission to discuss and find a final solution to the migration problem caused by a recent Dominican Constitutional court ruling, which has created tensions between the two Caribbean countries that share the island of Hispaniola.

Haitian president Martelly and his Dominican counterpart Danilo Medina met on Tuesday on the sidelines of a meeting of the Bolivarian Alliance of the Peoples of our America (ALBA) and of PetoCaribe, in Caracas, Venezuela, under the auspices of Venezuelan president Nicolas Maduro.

The two leaders agreed to address, through a constructive dialogue, the issue of the denationalization of thousands of Dominicans of Haitian decent, among other issues.

“I announce the creation of a high-level committee with representatives of both sides to address various issues on the bilateral agenda,” Maduro said on Tuesday in Caracas where he welcomed heads of state, prime ministers and other representatives from different countries of the region that are part of ALBA and of the PetroCaribe oil agreement.

Maduro announced that the joint committee will be comprised of five representatives of the Haitian government and five delegates from the Dominican Republic government, while Venezuela, the United Nations, the European Union and the Caribbean Community (CARICOM) have been invited as observers.

The committee will address issues regarding trade, migration, environment, security and the border. The purpose of such an initiative is to find a just, proper and balanced solution through which the interests and rights of all parties are protected, said Maduro.

A communication firm will also be hired to manage the communication of each party in what is already considered a promising move by both governments.

HCNN has learned that the first meeting of the joint committee is scheduled to take place on January 6, 2014, in Ouanaminthe, on the Haitian side of the border, across from the Dominican town of Dajabon.

The Dominican Constitutional Tribunal issued on September 26, this year, a ruling that revoked the citizenship of thousands of Dominicans, born to Haitian migrants considered illegal or in transit, making them stateless.

Medina’s government of has repeatedly explained that a decision issued by the Constitutional Tribunal could not be challenged by his administration, but Dominican authorities recently launched a plan that would help regularize the situation of many Haitians and Dominicans of Haitian descent.

However, many believe a good deal of accommodation needs to be brought to such a plan to allow those targeted to really get the expected benefits.