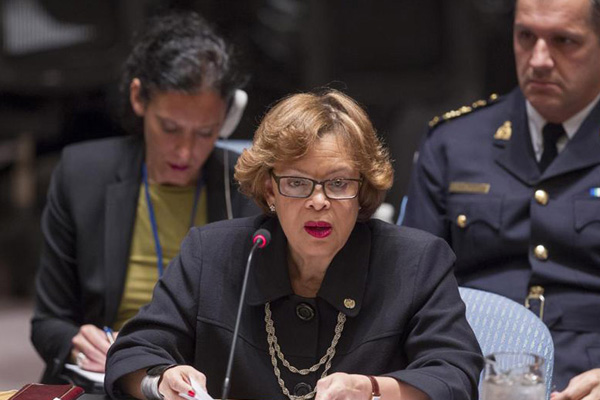 New York, USA — The government of Haiti has made progress towards the holding of elections critical for the country’s stability and development, the top United Nations official in the Caribbean nation told the Security Council on Wednesday.

Presenting the secretary-general’s report on the UN Stabilization Mission in Haiti (MINUSTAH), Sandra Honoré reported that the country had made “measurable gains towards the holding of long-overdue elections” by the end of 2015, despite the lingering “uncertainty” caused by the absence of a functioning Parliament.

The first-round vote has been scheduled for 9 August, setting the stage for legislative, presidential and local elections to be held this year.

“The prerequisites for the holding of elections this year have been established,” Honoré said, admitting that although some political parties had voiced discontent over the political calendar, most had signalled their intent to take part in the elections.

“I call on all political actors to continue a genuine dialogue and a transparent and consultative approach that contributes to building confidence among all stakeholders,” she said.

As part of the UN’s wider efforts to assist the beleaguered country recover from the devastating 2010 earthquake, the UN and Haiti’s international partners are working with the Haitian Electoral Council to organise fair, inclusive and transparent elections that will bring out the installation of the country’s 50th Legislature in January 2016 and a handover of power to a newly elected president in February 2016.

The UN mission is mandated by the Security Council to provide logistical support and technical expertise to assist Haiti’s government to continue building the capacity of its rule of law institutions at the national and local level.

Honoré, the secretary-general’s special representative and head of MINUSTAH, observed that the country’s security situation had remained “relatively stable” during the reporting period despite a recent increase in certain crimes, gang-related violence and public unrest. At the same time, most public protests giving voice to socio-economic grievances have been small in size and had taken place “without major incidents.”

Nonetheless, she continued, the international community and the Haitian government must sustain their commitment towards ramping up the development of the country’s national police in order to guarantee Haiti’s “enduring stability.”

On that note, the envoy remarked that recent developments in the area of rule of law were “reassuring” amid a push to reform Haiti’s 179-year-old criminal law framework and an initiative to decrease prolonged pre-trial detention.

The humanitarian situation, meanwhile, had registered a drastic reduction in the number of reported cholera cases, down from a peak of over 350,000 in 2011 to 27,753 in 2014. Moreover, the country continued to make progress in relocating those made homeless by the 2010 earthquake.

“However,” Honoré added, “the lingering epidemic and high levels of other water-borne and vector-borne diseases will persist until gaps in infrastructure and services are definitely closed.”

The massive earthquake, which struck Haiti on 12 January 2010 and killed 200,000 people, damaged much of the country’s infrastructure. Five years later, some three million Haitians still remain unsure about where their next meal will come from, according to the UN. Because of its geography, Haiti is highly prone to natural disasters such as hurricanes, floods, landslides and droughts. Poverty means that even moderate shocks can push people into hunger.

To that point, Honoré cautioned that drought in some areas of the country had resulted in reduced crop production in 2014, impacting 600,000 people with severe food insecurity and that UN humanitarian efforts would continue in order “to strengthen the continuum from recovery to development.”